Drink of The Week: Moscow Mule

Moscow Mule
I’m sitting in the Melrose Bar a couple weeks ago. It’s 8 a.m. and all of a sudden some copper mug rocks off its post and clanks on the floor. My friend grabs his head and says “Ouch.” He’s staring into the maw of a bloody Mary.

I ask the barmaid, “What’s that mug for?” And she replies, “Moscow mule.” Say what? “How about you pour me one?”

That was my introduction to an old drink.

The next day I’m fishing the Beaverhead and I begin some banter with a guy on the other side of the stream. Pretty soon he says, “Thomas, I’m going to wade across the river and kick your ass.” And here he comes.

By the time he gets to the boat I have a High Life for him and I rip him over the gunnel while he hangs onto my forearm. Turns out he’s the former mayer of Telluride, Colorado. We chat and he says, “Stop by the Lion’s Den in Dillon. That’s where I’ll be.”

Couple hours later that’s where I am and when the former mayor asks, “What can I buy you?” I reply, “What is that you’re drinking.”

A few days later the Mule reares it’s beautiful head again; I was spending Memorial Day weekend with the boys at Yellowdog Fly Fishing Adventures letting our posse of young kids tear up the banks of the lower Madison while we talked about world fly-fishing destinations and the good deals to be had these days. That’s when Ian Davis whips out some copper mugs.

Ian, taking my prompt says, “Yea, you want one.” Well, I suppose so. It would have been ungracious to decline, right? 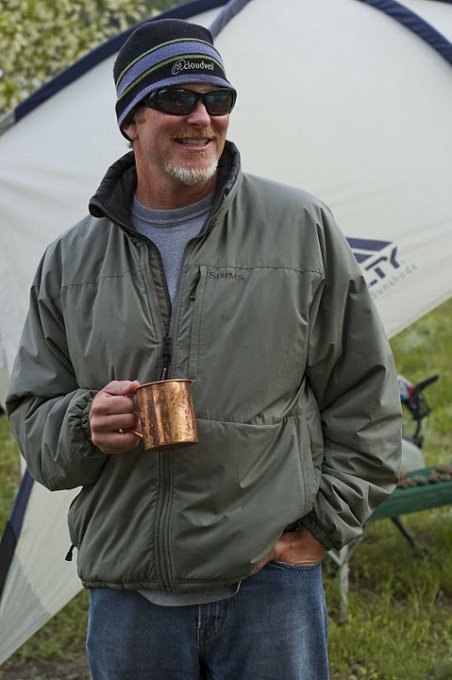 I see a lot of Moscow Mules in my future. They are a quick drink to make, they are super refreshing, which makes them a great summer thirst quencher, and you don’t need much in the way of materials to impress. Copper mugs are fashionable, but they aren’t required.

According to reports, the Moscow Mule was invented in 1941 when  John G. Martin, a spirits and food distributor on the east coast, and Jack Morgan, owner of the Cock’n Bull bar in Sunset Strip, Hollywood, met in a bar in Los Angeles. They mixed Morgan’s singer beer with Smirnoff Vodka and lime in order to market the proprietor’s struggling Cock ‘N Bull’s ginger-beer franchise.

They ordered specially engraved copper mugs and Martin set off to market it in the bars around the country. He bought one of the first Polaroid cameras and asked barmen to pose with a Moscow Mule copper mug and a bottle of Smirnoff vodka. Then he would leave one copy of the photo at the bar and take a second copy to the bar next door to show them that their competitors were selling their concoction. Between 1947 and 1950, thanks to their invention, Smirnoff vodka case volumns more than tripled and nearly doubled in 1951.

I’m saying you should try one of these this weekend. Or better yet, try one now. Let Tonic Nation know what you think of this drink.

This entry was posted in Cocktails, Drink of the Week and tagged Madison River, Melrose Montana, Moscow Mule. Bookmark the permalink.

2 Responses to Drink of The Week: Moscow Mule