Bimini: Fly-Fishing for Permit, Too 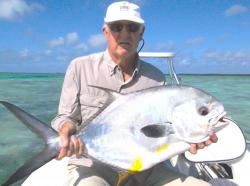 Hopefully you’ve had a chance to read my feature on fly-fishing in Bimini, which is running in the current issue of Fly Rod & Reel. I was amazed at that place and would like to find a way to buy a condo there and spend a month or two each winter searching for all the discoveries that are to be had there. I only spent four days on Bimini but I wished it had been four months. Bimini is located just 50 miles off of Miami in the Bahamas and you can find tarpon, permit, big bonefish, and lots of sharks there. Here’s a piece I ran across today in The Fishing Wire. I’m a fan of “Hondo” and didn’t know he fishes. So this article is cool on a couple fronts. Hope you enjoy.

Nicknamed “Hondo”, (a name inspired by a John Wayne movie of the same name), Havlicek was a local legend in eastern Ohio, and for many, including me, a lifelong role model. He was one of us, who with other local sports heroes, baseball’s Joe and Phil Niekro (the winningist brother pitching combination in MLB history) and football’s Lou “The Toe” Groza, were the boys who made it out of the mines and factories and into the limelight of major league sports.
For me Hondo Havlicek was The Man, but until last week, – See more at: http://www.thefishingwire.com/story/317396#sthash.rBo3ELO0.dpuf

This entry was posted in Saltwater, Travel and tagged Fly Fishing Bimini, fly fishing for permit, how to catch bonefish, John Havlicek. Bookmark the permalink.

2 Responses to Bimini: Fly-Fishing for Permit, Too