Bull Trout on The Dry Fly 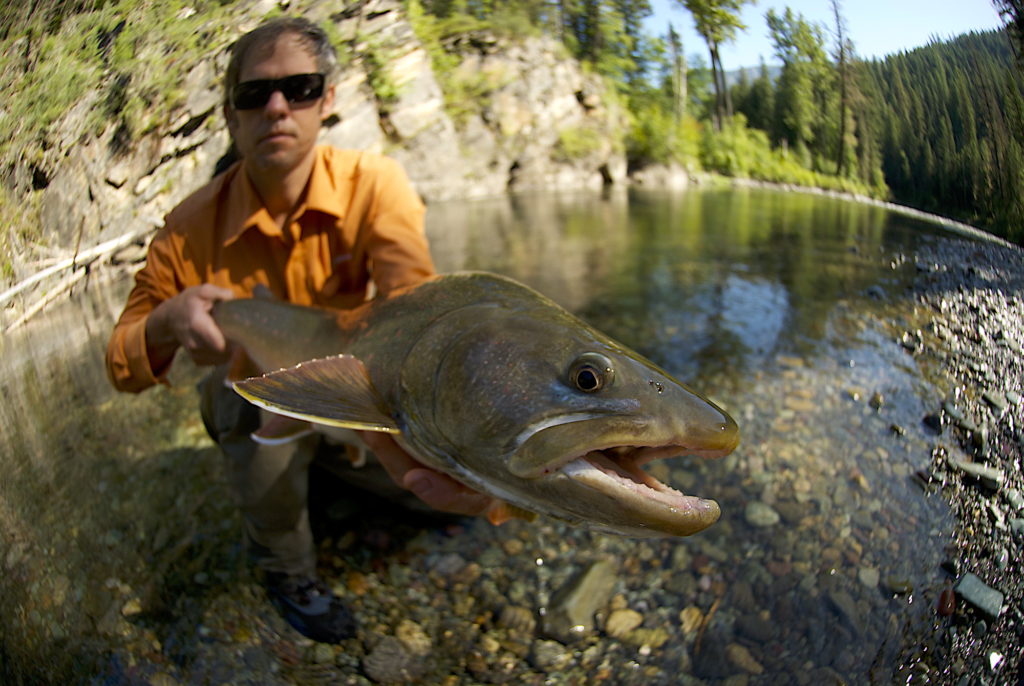 Big bull trout aren’t restricted to eating fish. They crush large nymphs and adult terrestrials on the surface, too.

I’ve often wondered why more people don’t fish bull trout with dry flies. I’m not talking about dainty PMDs and micro caddis. Instead, I’m visualizing terrestrials—ants, beetles and hoppers. And a recent article from Idaho Department of Fish and Game kind of backs up my argument.

I admit that most of the bull trout I’ve caught are taken underneath the surface on streamers. I mean, bull trout eat fish right? And the thought of prospecting a big river, like the upper Columbia in Canada, or the mainstem Salmon in Idaho, with a dry fly doesn’t make much sense. Too much water to cover. So you throw streamers.

Important to note, however, is that bull trout don’t spend all year in mainstem rivers. During summer and early fall they are often found in the tributaries, smaller water that makes the dry option viable. Less water to cover. Clear flows where the bull trout can spot a dry from the deep water they typically inhabit. Warmish water that makes the fish active and eager to chase a meal. 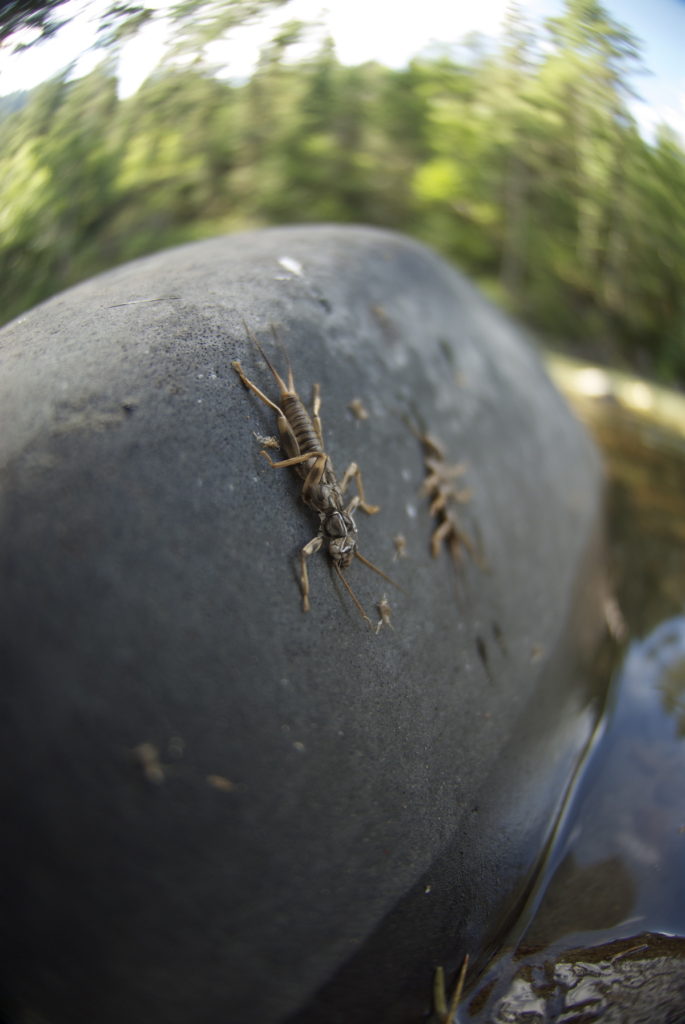 When you see stonefly shucks on the side of the river that should be a sign to try the a big dry or go underneath with a nymph.

And this from IDF&G: “One misconception about bull trout is that they are voracious fish eaters that can clean out all their fish neighbors where they live. This misconception may be reinforced by their shocking habit of latching onto small trout as they are being reeled in by unsuspecting anglers.  While there is absolutely no doubt that bull trout are fish eaters, even big mature adult bull trout have a much more diverse diet. One example of this was from a study conducted in the upper Salmon River. Researchers collected adult bull trout in the main Salmon River and found that 74 percent of their diet was fish and with the majority of the rest of their diet being aquatic invertebrates like mayflies or stoneflies. However, adult bull trout in Salmon River tributaries where they spend the summer and early fall was drastically different.  An amazing 87 percent of their food was aquatic insects, followed by 11 percent terrestrial insects, and only 2 percent fish. So, while bull trout were taking advantage of other fish prey during some of the year, during the summer months, the vast majority of their diet was other types of food.”

The first time I saw a bull trout eat a dry was about 10 years ago when I was fishing a small stream in Idaho. Friend of mine who didn’t know any better tied on a big black beetle pattern and cast it along a rocky bank. I was shocked when a five-pounder sucked it under and took off to the races. After that I tied on an ant and had several bulls give it a look. That’s when I decided that a lot of people were missing the boat. Bull trout on dries? Hell yes.

Like the swing game? Bulls will chase swung flies too, just like a steelhead might rise to a Gurgler. Go micro on the Gurglers if you are going to give it a try and don’t be afraid to employ the Leisenring lift. That tactic is often used with nymphs, an attempt to mimic an actual bug rising from the bottom to the surface. But it also works well when trying to “dance” a bug on the water, giving the impression of a struggling terrestrial trying to get off the water. 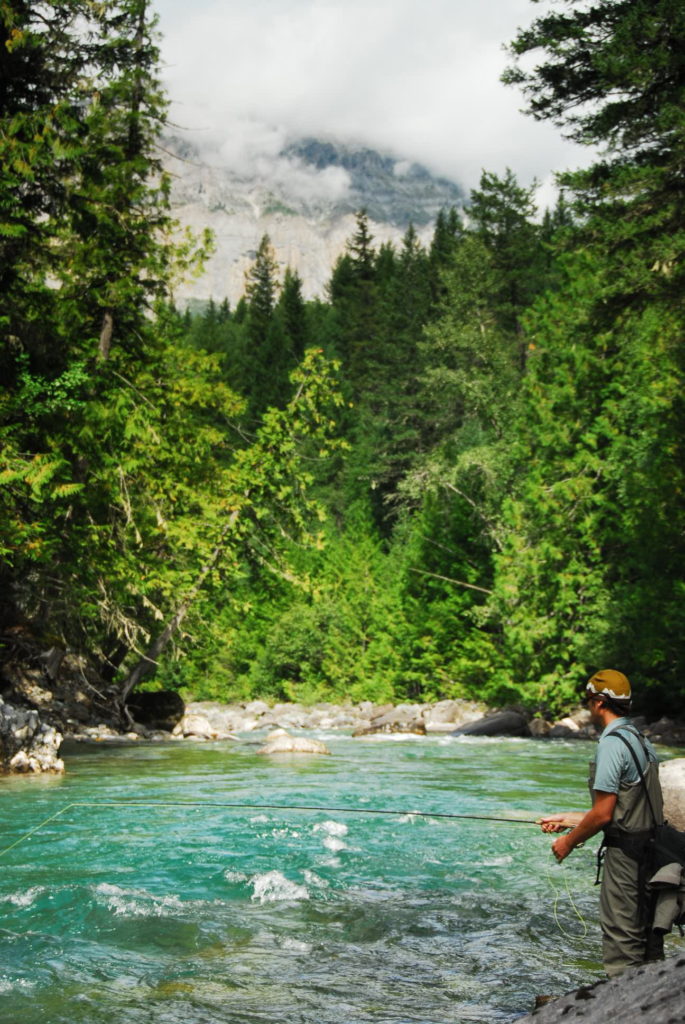 You can dance stonefly dries and hoppers, ants and beetles over deep pools to tempt bull trout. Strikes can be fast and powerful.

If you are fishing water that gets a fair amount of fishing pressure and you can’t get a bull to eat a streamer or dries, go with a nymph. I was fishing in the Fernie area in British Columbia several years ago and I couldn’t get a bull to touch a streamer. So I picked out the smallest stonefly nymph I could find, cut off the rubber legs so it wouldn’t look as gaudy, and proceeded to catch a wad of bull trout, including one beast that probably weighed 14 pounds. Point is, don’t get stuck in the streamer rut when fishing bulls.

The water is definitely cooling down right now, and lots of bull trout are headed out of the tribs and back to the mainstem rivers. Your opportunity to take a bull trout on the dry is dwindling this year. But, when the bulls head back into the tribs next summer, don’t be afraid to give the dry a try. Seeing a 30-inch long char coming out of the water for a terrestrial is a big thrill, especially on smallish water.