Alaska Kings on The Kenektok

The Price for Fresh

Although most anglers consider the capture of any anadromous fish to be a small miracle, there’s no doubt that a fresh fish, just in from the ocean, is better than a dark fish any day. That’s why I’m prone to drive right past the inland steelhead and salmon fisheries in my backyard and jump planes for mint-bright fish in British Columbia and Alaska.

I’m not the only one who thinks fresh fish are best and that’s pronounced by the terminology some anglers use to describe salmon and steelhead that reside in freshwater for more than a few days. In British Columbia anglers call post-spawn steelhead “old boots.” In Russia, along the Kola Peninsula’s awesome streams, holdover Atlantic salmon are called “darkies.” In southeast Alaska where I spent the summers of my youth, we called aging pink salmon, “musty humpies.”

A preference for bright, wild salmon is why I visited Alaska West last June, to pursue king salmon during the first week of the summer season. By doing so I rolled the dice, hoping for a fresh push of fish and the opportunity to battle a 40-pound chromer on a two-handed spey rod.

At risk was an absence of fish; salmon are rebels and a variety of factors influence their arrival to the Kanektok, including ocean temperatures and currents, weather systems, river flows and their disposition – sometimes I think they just like to make anglers sweat. The guides at Alaska West forewarned me: they said the first kings usually show up the first or second day of the trip. By the end of the week they roll in on each tide and it’s a slugfest. 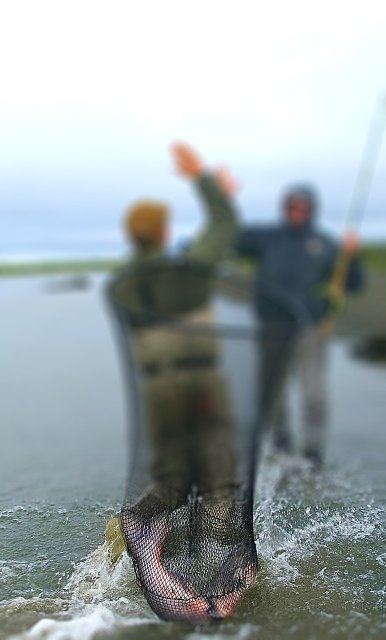 The harder they come the sweeter they hoist.

In angling you have to keep an open mind and believe what you’re told, but that’s easier said than done. After a fishless first day, shared by everyone in camp, the attitude at dinner wasn’t dour, but it was a little dubious – fish runs up and down the West Coast were late last year. That trend started in California, worked through Oregon and Washington, and made an additional statement in British Columbia before following suite on the Kanektok. After that first day I wondered, “Are they going to get here?” Six days of fishless fishing appeared as a giant wall and if it was going to be that way, I declared, I’d smuggled in not nearly enough liquid spirit or snuff tins to survive. If worse came to worse, I declared, I’d hop a skiff downriver to Quinhagak and chew on a fermented seal flipper.

The following day, while discussing art and the merit of snuff to my guide on a bar called Chrissy, and just after a big green king fly smacked the surface and began to swing, the rod jerked and I was fast to a fish. A few minutes later that big king wound half my line around a sweeper and was free. I’d like to think I lost a forty-pounder. Forty or not, it handed me my ass and as I sat down to retool my outfit I giggled like a kid – even in a late year the fish arrived, as promised, and true to form, their numbers would build through the week. I guess that’s the way I like it. There weren’t enough fish to feel like I was fishing a stocked trout pond, but there were enough to ring each cast with anticipation. And, when a fish came to the net the memory of its fight etched in memory.

When non fishers ask, “Why do you hold up a fish for the camera?” my answer is, “Why wouldn’t you?” That’s especially true when fishing for chromers early in the Kanektok season. Like any hard-won treasure – Spanish medallions, the Stanley Cup, Pamela Anderson – a chrome bright fish is worthy of the hoist.

During the course of that week everyone caught fish, including some real bruisers. In the end, as our plane lifted off from Quinhagak, I considered the decision to roll the dice: sure, I concluded, anglers arriving as we left would find more kings in the river, but they couldn’t say they found the freshest fish of the year, chrome-bright kings that spent their years in the north Pacific and returned to the Kanektok to see the first artificial flies of their lives. Now that’s fresh. And that’s why you roll the dice.