Over time, and especially now that my life includes family, I’ve learned that each extended trip to some fresh fly-fishing turf ought to be lived like it’s the last time you’ll ever see the place. I used to say to myself, “Well that was cool, but now that I know the deal, next time will be sick!” I’d fully expect to get back to the place. And then I’d never get back to the place. 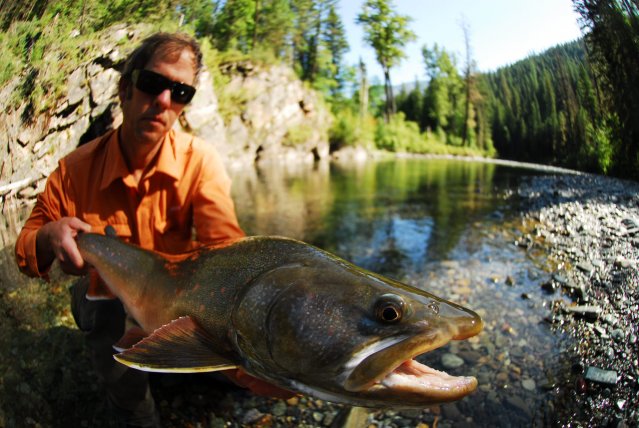 That’s why it was such a sweet deal to return to British Columbia in August, a chance to visit old stomping grounds in search of oversized bull trout and native west-slope cutthroats.

It wasn’t like I had anything to prove; the last time I fished the area we stomped all over the bull trout, taking scads of five to 15-pounders on nothing more intricate than Bitch Creek nymphs. But it’s not all about the fish. I love British Columbia, all of it—the forests, the mountains, the grizzly bears, the Canadians and Blues, the eh’s, and the oft-times inconsiderate weather… To return to British Columbia was a treat and I took Cloudveil’s former marketing director, Jeff Wogoman, along for the ride. 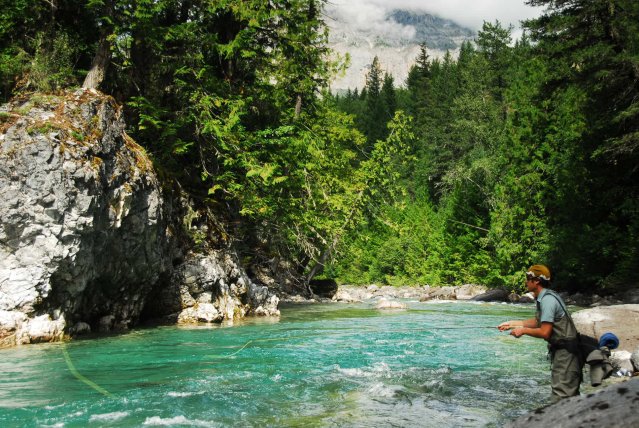 The first night of the trip we got lost on a maze of logging roads and seemed headed to Alberta if it weren’t for a couple dudes we met along one of those remote roads. I pulled up to the guys, who’d passed us on four-wheelers (going 60 or 70 miles and hour), and said, “This way to the Wolf?” (codename for the area I like to fish). The big guy, admittedly a rather scary looking specimen, especially when seen on a remote logging road, said, “Ah, ‘Fack’ you’re going the wrong way.” He made a broad sweep with an arm that seemed to indicate we might end up just south of the Yukon and said, “You need to go way over there.” And then he added, with a note of annoyance, “Hey, where are you guys from?”

If that’s not a loaded question. I squeaked out, “Montana,” and Jeff chimed in with, “Jackson Hole.” The big dude nodded approvingly and said, “Good, because if you were ‘facking’ Albertans we’d have to kill you.” I don’t know if he was joking. As we turned around the dude stopped us and said, “You guys need some beers?” and I answered, “No, but thanks anyway. We’re pretty well stocked.” His final salvo was this: “Ok, we’re just going to hang out here for a while and then we’re going to haul ass for about 40 clicks to town. But first we’re having more beer and a toke.” I took one last glance at the dude and estimated him at 65 years old.

What Wogs and I found in British Columbia wasn’t quite what I’d seen before, but we did manage cutthroats—12-to 17-inchers—at a rapid pace, all on bulky dries and we felt like we earned those easy fish.

One day we dropped straight off a logging road picked our way through the brush and downfall to the river, 900 vertical feet below. At a point during that march I said, “Um, yea, Wogs, typically I consider it to be a decent path when I can see my feet.” Unfortunately, the bull trout played fits with us during our stay—they were as tight-lipped as any fish I’ve ever encountered and, yes, I’ve cast to the sockeye express on the Naknek and Brooks rivers in Alaska, chartreuse sizzlers be damned. We threw Bitch Creeks, giant streamers, egg-sucking leeches, chrome-eyed buggers—everything we owned besides the shirts off our backs.

The thing is, we couldn’t get those bull trout to eat but, often, those bulls would terrorize the cutthroats on the ends of our lines. Go figure. In the end we landed a few bulls and I watched Wogs go through a terrific meltdown when he lost a fish that may have weighed 12, 13, 14 pounds or more. He had it beat, too. I’ll remind him of that anytime he tries to bring up my incident with pepper spray, which is another story for another day.

Despite our bull trout woes, the trip to B.C. was as memorable as they come and worthy of anyone’s attention this fall or next year. If you do visit southeast British Columbia in September or October, keep an eye to the regulations for bull trout closures. And don’t expect them to eat—once they reach the pools where they stage before the spawn they are mostly lockjawed SOB’s. But, if you’re a cutthroat junkie and you don’t like hookscars and you don’t mind working hard for your fish, man, B.C. is the place to be.