There are very few writers penning consequential angling essays these days, mostly because there are few outlets in which to sell those words and because there is a lack of imaginative writers on the angling scene.
One exception is the Montana-based Thomas McGuane, who at once dominates a market and backs it up with an ability that cuts any sense of guilt. No handouts here. The Longest Silence, a collection of 33 essays, is testament to what angling writing can be. In the essay, Back in Ireland, a young McGuane, lacking any set of responsibilities finds himself in a predicament, fending off the temptation of a blonde vixen on one side and the vagaries of a foreign country and an emerging image on the other. It’s life in angling or vice versa and few describe it as poetically or with such clarity. 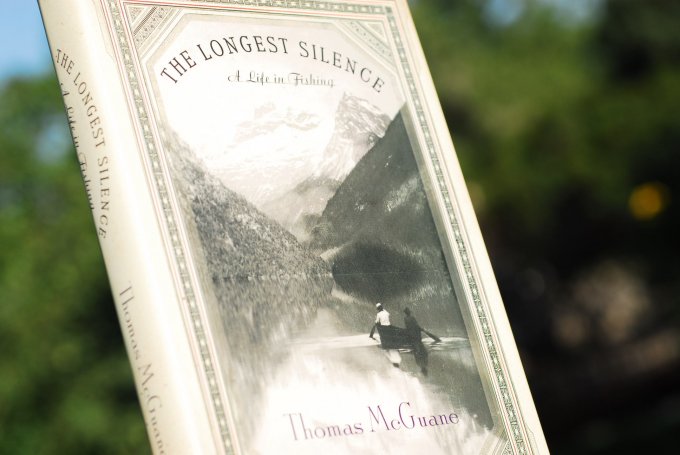 McGuane wrote, “… That only made my bottle blond more interesting, though a sudden image of myself riding a madwoman through the moonlit streets of a tiny, poor, devoutly Catholic town where I had neither credit nor credibility (the townspeople had arbitrarily decided that I was from New Zealand) seemed frightening. Better to remain a quiet-spoken Kiwi with a fly rod and a Morris than risk it with someone who more and more often crooked a finger at me in demented invitation as I slipped back to my room above Mrs. D’Arcy’s.” McGuane knows trout, but it’s his tales of anadromous fish, and his description of bonefish and tarpon action in the Keys, that bring me back to this read, at least once each year.
In the essay, Of The Dean, McGuane writes as only an avid steelheader, wealthy in time spent on blown-out rivers and failing runs, could do. In my mind, these passages cement his credibility. “All steelheaders are cruelly incredulous about fish caught “around the bend,” even if the catch was witnessed by Mother Teresa.” And this: “… But when the second day rolled around and I had not moved a fish, I could feel the slight clench start – the clench that suggests you might never hook another steelhead if you cast for a thousand years … Half of the second blank day was over and I knew I was pressing … pressing won’t work on steelhead … An effective steelheader must control his temperament and master his touch through long hours of disappointment and the wild conditions of Northwest coastal rivers.”
If you’re a hard-core fly fisher do yourself a favor and pick up a copy of The Longest Silence and pack it in your duffel. If McGuane’s passages don’t make you think about our lives in this sport … or why you shouldn’t catch the next plane to Key West, you should sell the rods and buy a set of clubs.

This entry was posted in Books and tagged Montana, Tom McGuane. Bookmark the permalink.