Straightforward Midge Tactics
Most people think that a trout’s diet consists mostly of big insects, such as the heralded salmonfly, golden stonefly and green drake. But the reality is this: no other insect is as important to trout as the diminutive midge, especially during winter when clouds of midges, and little else, can be found on most western rivers.

Midges are two-winged insects that belong to the order Diptera (mosquitoes, horseflies and craneflies belong to that family, too). During winter anglers can find trout feeding at the surface on adult midges, but the majority of the action takes place under the surface where trout hammer midge larvae and pupa. Midge larvae are incredible insects—they can survive major dehydration (via cryptobiosis), and remain dormant for many years waiting for a desert storm to provide the moisture they need to change into pupa and adults. On the other end of the spectrum, some midges can survive being frozen. Not surprisingly, midge larvae are abundant, to the tune of more than 12,000 midge larvae per square yard in some midge bastions, such as the Bighorn and Missouri rivers. 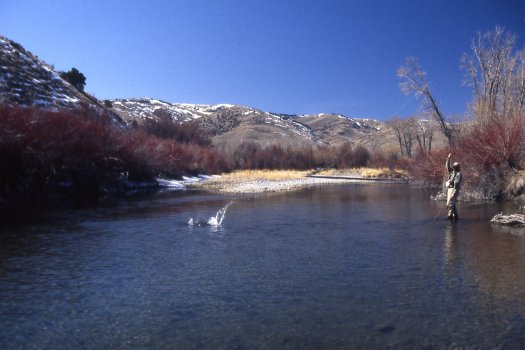 Trout are most likely to eat midges in the pupa stage when those insects swim from the bottom of a river or lake to the surface in a twitching motion. At that time, they are extremely vulnerable to trout. Also, they often gather in masses, just under or on the surface, which makes them prime targets for trout—the fish can swallow mouthfuls of midges in one bite.

Fortunately, there are many effective patterns to match midge pupa and they are not difficult to fish. Some top imitations include serendipities, palomino midges, disco midges and thread-bodied blood midges. My all-time favorite is the bassie, which is super easy to tie and as effective as any other imitation.

Beginning flytyers can whip out a half-dozen or more brassies in an hour. Proficient tyers can easily triple that number. My personal record is 30 brassies in an hour—I drank about four cups of coffee, cranked the Alice and Chains, and let the peacock herl fly. Another reason why the brassie is so appealing is that it doesn’t take complicated or expensive materials to tie. All an angler needs are size-16, 18 and 20 hooks, some thin copper wire, and peacock herl—all readily available at local fly shops. 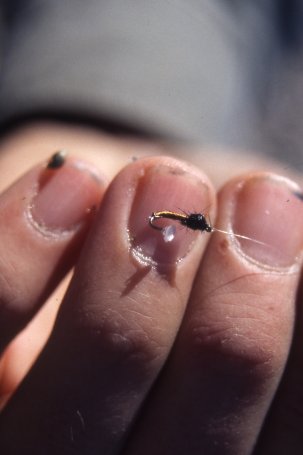 Narrow miss with the brassie.

Just remember, a brassie should drift just above the bottom rocks. At the end of a drift, the brassie will swing through the water column, covering the entire river from bottom to surface. By doing that, attentive anglers can determine the depth that trout are holding and feeding at and adjust their indicator accordingly. On future casts, the brassie is placed at the desired depth through its entire drift.

That’s a technique I’ve used when fishing many of the West’s trout waters during winter and it rarely fails. For instance, there’s a small spring creek in central Washington called Rocky Ford. It’s loaded with big, midge-scarfing rainbow trout that seem partial to brassies.

I fished Rocky Ford one brutally cold day when any sane angler might have locked themselves inside their house, stoked the wood stove, cracked open a favorite refreshment and plopped down on the couch to view playoff football games. Instead of doing that, I spent the day chipping ice out of my rod guides. Occasionally, I had to quit fishing and shove my hands into fleece-lined pockets in an attempt to coax my fingers to life. However, between those hand-warming sessions I drifted brassies through Rocky Ford and its rainbows—fish that commonly stretch 20-plus inches long and weigh four or five pounds—were more than willing to please. Every third or fourth cast, the strike indicator shot under the surface and I set the hook. Often, I missed the fish, but a dozen or more times that day I sank the barbless hook point into the mouth of a rainbow and enjoyed the ensuing theatrics.

It doesn’t matter where you fish this winter, could be Montana’s Bighorn, Missouri, Bitterroot, Rock Creek or Madison, or it could be somewhere else in the West, such as Rocky Ford, Arizona’s Lee’s Ferry, Colorado’s Taylor River or even Wyoming’s Shoshone River—trout eat midge larvae and pupa like crazy and the brassie is a pattern that will not fail. So take some time to tie a few brassies and wait for the weather forecast that assures temperatures above freezing. Drift those patterns through the medium speed, medium depth runs and you’ll have a blast.
Here is a standard recipe for tying the brassie:

This entry was posted in Flies, Northern Rockies and tagged brassie, midge. Bookmark the permalink.