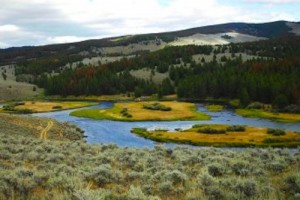 One of the coolest aspects to fishing southwest Montana’s Big Hole River is that you stand the chance, especially on the upper and middle portions of the river, to catch a native arctic grayling on any given cast.

And friends and I have caught a few over the years, including a couple that may have stretched 16 inches or so. Nice grayling! And I remember one time, just a couple years ago, when photographer Brian O’Keefe and I were helping a film crew get footage of trout on the Big Hole—way down by Melrose and, traditionally, outside the grayling’s range—and O’Keefe came up with a solid 14-inch grayling.

The Big Hole, really, is the only place in the Lower 48 where you can legitimately expect to catch wild, self-sustaining grayling in a river. But over time grayling populations have declined and the grayling is now listed as a threatened specie in Montana.

Unfortunately, the Big Hole Valley is big-time cow country and it gets grazed hard, even on public lands, which is my major issue with the farmers and ranchers I meet in Montana. Don’t get me wrong, some of these families support sportsmen and allow access to some great property for us to hunt and fish on. But the people who laugh in your face when you ask and then send their livestock out onto public land with a rape and pillage mentality are types I detest.

I don’t know the ranchers in the Big Hole Valley, but a group called Western Watersheds Project does…and they aren’t happy. Recently the group filed an appeal of 12 grazing allotments that cover 6,332 acres of Bureau of Land Management property in the upper Big Hole Valley. The leases were approved last summer, but WWP says the BLM should do more thorough study of how cattle grazing influences grayling.

Of course, the BLM is covering their backs and saying the grazing leases are allotted on sound science, but Tom Woodward, Montana director for WWP, says the agency is essentially dooming fluvial arctic grayling to extinction. He said that more thorough analysis should be done throughout the watershed that includes options of reducing or eliminating grazing to consider how it would benefit the fish and other species.

Pat Fosse, Dillon BLM assistant field manager for renewable resources, disputes the agency’s position and jabs, “They don’t want livestock grazing at all up there because they just think the livestock industry is taking water out of the system that would go for grayling,” she said. “We are taking measures to improve those smaller tributaries that are up higher in the watershed.”

Want to read more about what is certain to be a long, drawn out fight over Montana’s last viable grayling population? Go to www.mtstandard.com/news/local/article_92419f74-29d5-11e0-8da8-001cc4c002e0.html and read Tonic friend Nick Gevock’s article in the Montana Standard.