A North Idaho Near Disaster
Backpack trips into remote trout streams are usually about having too much stuff—too much food, too many pairs of underwear, too many flies, rods, reels … When the opposite is true it’s typically in regard to a dearth of suitable beverage, or forgetting a rain-fly, or the bear spray, or a lighter and matches. Something to turn an anticipated experience into a near-disaster.

A couple summers ago, in July, I engaged on a five-day backpack trip into north Idaho with a friend, Jeff Wogoman. We were searching for big, native cutthroat and a few bull trout. Jeff viewed the trip as an opportunity to field-test some prototype gear, including Cloudveil’s super-lightweight 8X Wading Boot. 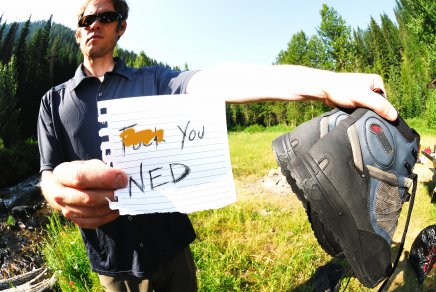 Wogoman explaining his disgust with the boots.

I just about jumped out of my boots when Wogs yelled, “What the hell! You’ve got to be kidding me!” His rage broke the silence of a perfect summer morning and all I could think was, He broke his sunglasses or he snapped a rod or, after a pre-hike belt, he failed to screw a cap onto the Crown Royal and now it might be leaking in the bottom of his pack. Instead, he said, “Ned’s dead! He gave me two right-footed wading boots!” 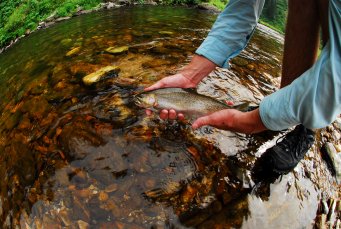 Fortunately we found native cutts and bulls in abundance.

Ned referred to Ned Hutchins, Cloudveil’s product manager, a veteran fly fisher who knows the value of felt-bottomed boots on freestone streams, especially those located in near-wilderness where a turned ankle or a bad fall could render a dream-trip into a dangerous game. Wogs and I huddled for a moment. The nearest town was at least 50 miles away over bad dirt road. The nearest fly shop was 20 miles farther than that. The nearest quality wading boots, we declared, were at least a half-day drive away. If we went for the boots, we’d sacrifice the angling day. Fortunately, while digging through the cab of my truck I came up with an answer—I pulled a pair of ink-black, slick-soled New Balance running shoes from the depths, handed them to Wogs, and said, “Retro is in.” 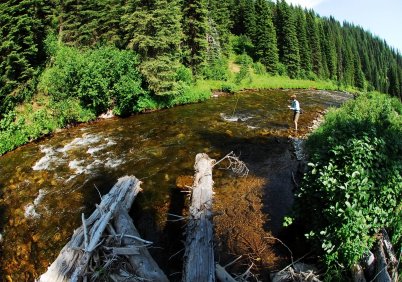 That Wogs survived the trip or, more accurately, that his ankles and knees and wrists weathered north Idaho’s freestone storm was a miracle. I figured his dexterity could be attributed to a youth spent in competitive gymnastics and college years wearing a male cheerleading suit. There were times when Wogs spun circles and then launched off slick, midstream rocks, demonstrating the splits in midair, ala Mary Lou Retton. Other times he nearly lost it on steep off-trail sections, feet sliding down the scree, momentum finally stopping at the bottom of a mountain in an airborne spin and a perfect two-point landing, ala Tanya Harding’s defamed triple axel. Each time I witnessed that grace I felt like waving a flag and throwing wild roses. It was as if I were witnessing the birth of a new American legend. I don’t think Wogs, humble man that he is, saw it that way.

At the end of what turned out to be a most memorable and productive fishing trip, with a grimace on his face Wogs tore a piece of paper from a notebook and scratched his sentiments, words not fit for print here, and demanded that I snap a photo to e-mail to Ned.

That September, at the Fly Fishing Retailer show in Denver, I caught up with Ned and gave him a rightful amount of good-natured abuse. Ned, ever the clear-minded thinker, said, “Yea, it’s too bad that Wog’s had to dance around north Idaho in tennis shoes, but the real questions is this: Who’s the poor son-of-a-bitch that ended up with two lefts?”