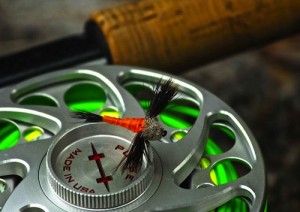 Natural inclination these days is to go with a variety of sink-tips to get your metalhead. I did that last year on Idaho’s Clearwater River and hooked four fish from one pool and then thought, I wonder if they would have taken a dry? Are you kidding me? Hell yes, they would have eaten a dry.

I say that because I was on the Dean River in July and I almost passed up the opportunity to throw a skater but I finally tied it on and promptly missed two fish. Ok, so maybe I wouldn’t have raised those fish on the Clearwater but I have this feeling they would have eaten on the top. When I hit the Clearwater in September and October I’m going to throw a skater, probably Peter Crow’s Drag ‘n Fly, and see what happens. Crow is a steelhead junkie and a sunglasses expert. He spends a lot of time on Northwest steelhead streams and he shared his favorite steelhead fly with us. Here you go?

Why do you like it? Because you have confidence in it from previous hookups, or because it does something specific in the water?
It’s a surface skater so the fly adds a fun visual element to steelhead fishing. At times it kicks around on the surface, moves sideways and pops up a small amount of water. The stiff moose hair wings help plane the fly up onto the surfacefilm when under tension. Takes and boils are a blast to see.

Which type of water does it fish best in? It works in most types of water where there is decent water clarity.

Most memorable fish on that fly? Actually, two of them because they were both in the same run. I’m partial, actually stuck on this fly because the first time I used it on the Clearwater (River) in 1981—and this was the first time I ever attempted skating a fly or using a dry line—I caught and landed a fish on my first cast. I was in disbelief. I also caught my largest fish on a skated dry in the same run on the same fly.

What’s your best backup pattern, the one you turn to if the aforementioned fly doesn’t produce? An orange or green fly I call a Hi-Lighter. It’s a simple fly tied with edge bright. I don’t know if it has another name or where it originated, but I received it one fall, probably around 1995, from a young fly tyer at the Kelly Creek Flyfishers fly fair in Clarkston, Washington. Wish I knew whom this kid was, because I owe him thanks for plenty of steelhead to that fly. You can fish the Hi-Lighter in any size, but on the rivers I often fish, a size-6 is perfect. Occasionally I go up or down one size.

What is the ideal river, again given prime conditions, to fish that fly? Or, what is the prime region to fish that fly? Both of these flies get fished in the Lewiston, Idaho area and on the surrounding waters. It’s best in fairly clear water, with a dry line and water temperatures ranging between 48 and 65 degrees. The rest is up to you.