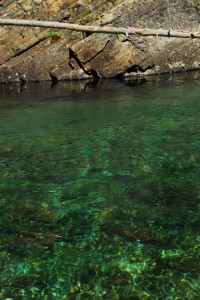 I used to interview the chief biologist for every major stream in the northern Rockies—each year—and I learned a ton of useful information from many of them.

There were things that we talked about openly and there were things they told my ears only. One of the most interesting revelations was the importance of tributary streams to the health and ultimate survival of fish. I heard the same thing from many biologists, especially in the heavy drought years that we seem to be coming out of. They said the mouths of the tribs were were up to 90 percent of a river’s trout population (and we are talking about some sizable, well-known trout streams here) would go during the hot summer months, meaning mid-to-late July on through August. The reason, of course, was to escape elevated water temperatures.

So, when I was reading the Columbia Basin Bulletin the other day I came across this excellent article written by Bob Esselman of Idaho Department of Fish and Game. His observations back up the statements so many biologists made to me over the years. So, give this a read and keep it in mind when fishing rivers or lakes and reservoirs this coming summer. You may find yourself in the middle of mass concentration of fish, having a field day.

By Bob Esselman, Idaho Department of Fish and Game

Even after years of working on Idaho’s rivers and streams, a fisheries project can still amaze me.

This past summer I got to enjoy one of those pleasant surprises. As both a fish biologist and an avid angler, I know that the cold, flowing water of a tributary stream is important to cold water fish species, in Idaho primarily salmonids, such as rainbow trout, cutthroat trout, bull trout, mountain whitefish, steelhead and chinook salmon.

Last summer the Salmon Region fisheries crew sampled the main stem of the Salmon River from Stanley downstream to Challis. The Sawtooth Fish Hatchery stocks rainbow trout in this reach of the upper Salmon River throughout the summer, and most anglers target those stocked fish. It had been a while since we evaluated the wild fish population in this reach. Generally, they were considered to be at a relatively low density. From my perspective, this was going to be a mediocre fish population at best. I expected to see a low density of hatchery fish with a few wild trout.

In July, we donned our snorkel gear and examined 17 sites close to the mouths of tributaries flowing into the Salmon River. And here’s where the excitement picked up. In these locations, we counted 107 cutthroat trout, 173 wild rainbow trout, 108 hatchery rainbow trout, 76 bull trout, 341 mountain whitefish and 456 juvenile chinook salmon.

As a tributary flows into the main stem of the river, cold water enters the relatively warm river. These differences in temperature ranged from 2 to 14 degrees Fahrenheit. You can feel it, and sometimes see it. So can the fish. Temperatures in the Salmon increased as we moved downstream. In some locations most of the available main river habitat was too warm for native trout species. The fish were packed into the limited cold water areas where tributaries flowed into the river. Once the cold water plume mixed with the warmer main stem, fish were no longer observed.

The underwater concentration of wild trout and salmon in these areas was dramatic. To see a school of 55 bull trout, 22 adult cutthroat trout and 96 chinook salmon juveniles in an otherwise “empty” pool was awesome. It is one thing to talk about the importance of cold-water influences on salmonids; it was incredibly poignant for me to actually observe it.

These are the kind of experiences that inspire fisheries biologists to continue working with irrigators and land managers to make sure cold water is allowed to reach the main stem of rivers. Many efforts are now under way by water users to improve flow in tributary streams. These efforts are voluntary on the part of water users, and without their support, many fish populations would no longer persist.

Seeing firsthand fish using these habitats made me appreciate the importance of these tributaries for our native fish and for improving fishing for Idaho’s anglers.

Bob Esselman is a regional fisheries biologist in the Salmon Region.