Steelhead and Rainbows May Closer Than We Think 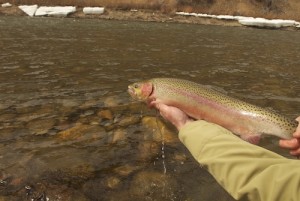 NOTE: I found this fascinating (and surprising) article on Columbia Basin Bulletin, which covers a lot of fish issues in the West. I’ve posted part of the article here. If you’d like to read more, and I suggest you do so, visit CBB’s Web site at www.cbbulletin.com

Steelhead and rainbow trout look different, grow differently, and one heads off to sea while the other never leaves home. But the life histories and reproductive health of wild trout and steelhead are tightly linked and interdependent, more so than has been appreciated, a new Oregon State University study concludes.

The research could raise new challenges for fishery managers to pay equally close attention to the health, stability and habitat of wild rainbow trout, the researchers say, because healthy steelhead populations may require healthy trout populations.

In a field study in Hood River, Ore., researchers used DNA analysis to determine that up to 40 percent of the genes in returning steelhead came from wild rainbow trout, rather than other steelhead. And only 1 percent of the genes came from, residualized hatchery fish  fish that had stayed in the stream and mated, but not gone to sea as intended by the hatchery program.

“It used to be thought that coastal rainbow trout and steelhead were actually two different fish species, but we’ve known for some time that isn’t true,” said Mark Christie, an OSU postdoctoral research associate and expert in fish genetic analysis.”What’s remarkable about these

findings is not just that these are the same fish species, but the extent to which they interbreed, and how important wild trout are to the health of steelhead populations.”

This research, just published in the journal Molecular Ecology, was based on a 15-year analysis of 12,725 steelhead from Oregon’s Hood River, each of which was sampled to determine its genetic background and parentage. It was supported by funding from the Bonneville Power Administration.

The study reveals a complex picture of wild trout and steelhead intermingling as they reproduce. A steelhead might be produced by the spawning of two steelhead, two wild trout, or a returning steelhead and a trout.

Rainbow trout are small to moderate-sized fish in most rivers, but if that same fish migrates to the ocean it can return as a huge steelhead weighing 30 pounds or more, prized for sport fishing. Researchers still don’t know exactly why some trout choose to go to the ocean and others don’t, although they believe at least some part of the equation is genetic.

This entry was posted in Conservation, Northwest, Steelhead and tagged Oregon. Bookmark the permalink.