Connect: What do you know. A video with a message. 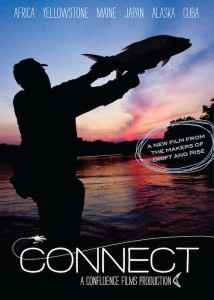 Are you getting what you need with your ad dollars in video? In Connect you do.

There are a lot of dollars being sprinkled around fly fishing today, mostly to support video projects that may or may not give a company some air time at one or more of the film tours that roll across the country each year. Their presence on the tour, of course, depends on whether they are even good enough to make the cut. And many of them aren’t.

This support of video isn’t bad news because the potential for that market—and more importantly the potential to reach outside our core people and draw newcomers into the sport—is huge. I’m just waiting for some consistently good material to rise to the top, if it hasn’t already. What I’m getting at is this: fish porn is ok—and some people don’t need anything more than that—but just showing a guy or gal catching fish doesn’t make the cut with me, unless your showing it around a group of guys, fueled by some hard stuff, with music pumping out of high-decibal speakers. Don’t get me wrong. I’m down with that crowd and I’ve attended enough of these things to know that watching jumping fish vids can be fun. I’m just asking, what are you going to do the rest of the time? Rest on the couch by yourself or invite a new girlfriend to sit down and watch? Can you say death sentence. Going to whip up some popcorn for the kids and let them listen to a procession of f-bombs and watch a bevy of scenes where anglers are throwing back the whiskey shots after landing an 11 inch trout, celebrating as if it’s the birth of their first child?

I’m a print media guy and I believe in it to the core. I’m not really enjoying this paring down of ad support for magazines that have carried this industry for decades and continues to do so today. Old, tired? I buy that argument, but myself and others are trying to fuel our pages with content that hasn’t been seen before. And we’re still the best vehicle for manufacturers and service-oriented operations to reach fly fishing’s buying crowd—how else are you going to reach 80,000 really hard-core anglers on a regular basis? With articulate words and sweet imagery? You want to sell product? Go to the trade and consumer shows and peddle your wares and buy advertising in print magazines. And don’t base your decision on whether you are or are not included in the actual text. If that’s a prerequisite and a magazine acquiesces (can you say Fly Fish America) you just flushed your credibility, and any merit of that text for the reader, right down the toilet.

If I put myself in your shoes this is what I’d do: I’d research the magazines and I’d buy space in one or more that reaches the demographic that’s interested in your product. And I wouldn’t  just look at overall numbers. I’d find out how a magazine boosts its circulation because in a lot of instances that has almost everything to do with whether you should expect any readers to actually buy your product. I’d do the same for Web sites and decide if overall numbers are important or if content is the key. In my mind it’s about content, quality content—what’s the value of a visit to a Web site if it’s just to a message board or discussion area where people cuss at each other and rail on the industry? Buy into a Web site that’s professional and actually does something for our followers, meaning it provides a place to find information, learn more about products and places. In addition, I’d hit those trade shows and ingrain myself in the industry, show people that the company isn’t a flash in the pan and that you, the owner, actually cares. I’d build a great Web site and I’d produce a professional blog to pronounce the company’s voice. And, yes, I’d set some dollars aside in support of these video projects, but I wouldn’t just hold the wallet open. There are too few ad dollars to go around these days and the people who have talent and dedication should be the ones who garner the low-hanging fruit. We need good videos in fly fishing and we’re getting some, but we need more of them every day.

One of the companies producing good film is Confluence, which is co-owned by Jim Klug of  Yellow Dog Flyfishing Adventures and cinematographer Chris Patterson, who works often high up in the Hollywood film business and spent years as Warren Miller’s top guy. When  you put someone as driven and ingrained as Klug in partnership with the talent of Patterson, you have a winner. And I think that is exactly why Confluence is seeing as much support for their projects as anyone—they put together a visually stunning product that showcases some of the sport’s and the industry’s most dedicated people, and they wind a story around the visuals that comes from the heart and years of spending time on the water, an understanding that lends depth to their work and reaches a broad spectrum.

Their latest film is Connect, which I got to see premiered at the Ellen Theater in Bozeman in October. This film comes on the heels of two previous vids called Rise and Drift. Connect is the most polished of the offerings and it takes the viewer on an entertaining ride to various killer fly fishing destinations, including Japan, Alaska, Cuba, Maine, Yellowstone, and Africa. The footage is great whether it’s a scene of northern pike crushing surface patterns, or 20-pound tigerfish smacking their jaws and flashing those nasty teeth while being hoisted for a once in a lifetime trophy shot.

I’ve watched the film several times since the premier and I like it more each time I do so. What it really comes down to is an acknowledgment by its creators, and a direction of the narrative that demonstrates the thrill of the trip, the pursuit and the capture of fish and, equally, the connection between angler and fish, angler and place, and, especially, the partnership of anglers.

That feeling is summed up in a portion of the 93-minute movie when Jim Bartchi of Scott Fly Rods is chasing Yamame trout on a crystal clear and remote mountain stream. They are small, but tough fish and Bartchi is putting everything into the effort. But these aren’t the giants that you or I feel like we have to pursue and get pictures of to validate our existence as fly fishers. There’s more to Bartchi than that and he eloquently dictates that in the film.

He says, “These fish are so spooky, so difficult to catch. You have to come in aware of that and often come in on your hands and knees… you don’t have much more than a cast or two to either convince them to eat your fly or to send them under the rocks into hiding. It just goes to show it’s not really the size of the fish but more the experience and environment where a little fish like this can be every bit as challenging and exiting to catch as what we normally consider a big trophy fish.”

There are big fish in this movie and some killer hook-up and catch scenes, enough to keep anyone interested. But there’s more—a story wound through the footage that so much of the competition lacks. Confluence isn’t the only company producing good films and great marketing opportunities for the industry, but they might be doing it just a little better than the rest. That’s for you to decide and you can begin that process right now, by checking out the trailer for Connect. If you want to order the film visit, http://www.confluencefilms.tv/

This entry was posted in Industry, Videos and tagged Japan, Klug, Yellowdog. Bookmark the permalink.