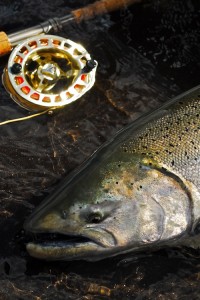 We just threw out some props to the Seattle, Wash., based Wild Steelhead Coalition and it’s already time to do it again. That’s because they’ve fought hard to salvage the Elwha River, which flows into the Strait of Juan de Fuca and offers one of the best possible steelhead and salmon recovery stories in the history of the world, if

a tribe isn’t allowed to operate a massive hatchery there.

WSC has been instrumental in getting a suit filed that would block a hatchery program on the Elwha, citing that hatchery as a threat to the existing native fish populations, which include wild steelhead and one of the greatest races of Chinook salmon on the planet. Here’s the dirt:

Citing warnings from agency and independent scientists, four conservation groups filed suit today against several federal agencies and officials of the Lower Elwha Klallam Tribe (in their official capacities) for violating the Endangered Species Act (ESA) and ignoring the best available science and threatening the recovery of killer whales, Chinook salmon, and native steelhead by funding and operating fish hatchery programs in the Elwha River.  The groups agree with federal and state scientists and a recent review by the Hatchery Scientific Review. READ MORE

This entry was posted in Conservation, Northwest, Washington. Bookmark the permalink.