The Aces of Spey 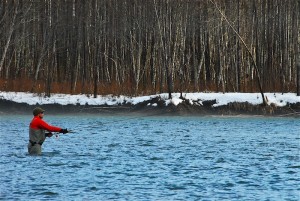 In the early-2000s I was engaged to an Oregon girl who’s father was a rabid Northwest flyfisher. Appealingly, he owned a cabin on British Columbia’s Kispiox River and showed me photos of several 30-pound steelhead he’d caught there.

When I told friends about the engagement they said, “Sweet, Thomas…the Kispiox!” That’s an indication of my fish-head friends’ mentality and the fanaticism of Northwest steelheaders in general.

What I remember most about this girl’s father was his detest for two-hand spey rods, which were becoming the rod of choice on his beloved Deschutes River. Why would you cast one of those meat-sticks when most steelhead are caught near the banks? he asked, adding, if you hooked a fish on one of those rods you wouldn’t even feel the fight!

I adopted that attitude, mostly because I was sucking-up for an invite to the Kispiox. But a few years later I noticed how far the two-hand spey guys cast, and how well they covered water and, yes, how many fish they caught in comparison to me. 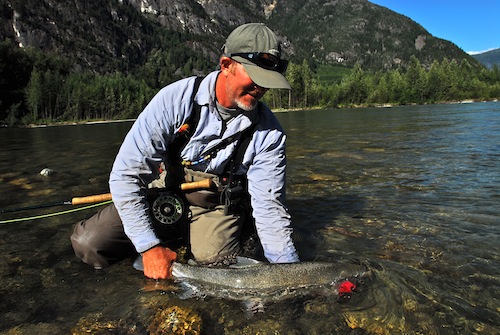 Oh, snap. Launched a long one on the Dean River for this brute.

Soon, I was heavily researching spey options, visiting with a fly-fishing cult that spent its time either fishing Washington’s Skagit and Sauk rivers or cutting apart and then splicing together various sections and weights of fly lines, attempting to build the ideal Northwest spey system. Some of those people—including Dec Hogan, Ed Ward, Scott O’Donnel, Mike McCune, Scott Howell, and Mike Kinney—lived in rented garages. Others were tenting-it along the banks of famous rivers. Some set up camp in Oregon and opened outfitting businesses.

Together, these guys—the Aces of Spey—developed today’s Skagit spey line, which utilizes a non-traditional short-belly line, heavy heads and a variety of short-stroke, rocket-launching casts with crazy names, such as the Snap-T, the Perry-Poke, the Snap-Z and the Wombat. Today, if you’re fishing a Northwest steelhead stream and you aren’t throwing a Skagit line you ‘aint… well, let’s just say single-hand rods and 60-foot casts are passe. That’s what I’ve learned and that’s why I now hold four true spey rods and two switch rods in my collection, and there’s one, Sage’s TCX 12′ 6″ 7-weight—nicknamed The Deathstar—that I can throw for a mile.

There’s good reason for the Skagit spey system’s appeal to me and others: spey rods cast farther with less effort than single-hand fly rods; they mend line efficiently, which allows  anglers to really control the speed and depth at which a fly drifts; and, most important, they allow anglers to cast long, heavy, shooting heads and weighted flies with ease. That’s particularly advantageous on big, brawling coastal rivers that often flood and are guarded by forests that reach over the water. On such streams, anglers need a quick casting stroke so their backcasts don’t get caught in the brush and limbs behind them, and they need to efficiently cast those shooting heads and bright, heavily weighted flies into turbulent and oft-times murky water. Trying to do so with a single-hand rod, a light sink-tip line, and a bead-head nymph is like packing your Daisy to Africa for cape buffalo, expecting to take one of those brutes down with a shot to the iris. Can you say gored in the hip? 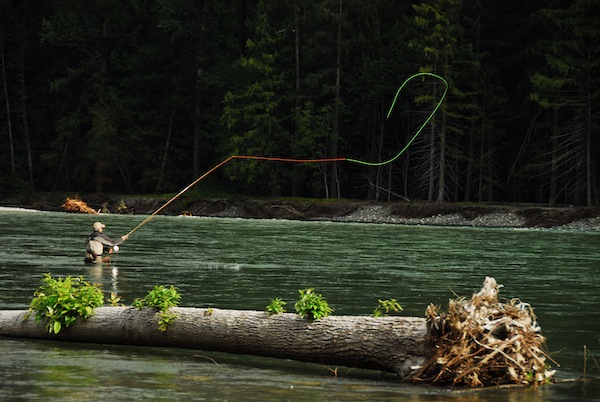 Even an average caster can roll out some line with a two-hander. You’ve got to give it a try, become a believer.

According to Andrew Bennett, who owns Deneki Outdoors, which includes lodges on British Columbia’s Dean River and Alaska’s Kanektok River, the Skagit system makes life easier on him because clients pick up spey casting in a couple hours whereas previously it may have taken them a couple weeks.

“Without a doubt, for the average angler, the Skagit lines made it much easier to fish well at our operations in Alaska and British Columbia,” Bennett said. “The Skagit system is way more forgiving than other types of spey, such as the Scandinavian casting style. That style of line and cast uses a long belly line and your timing has to be perfect. With the shorter-belly Skagit lines you don’t have to be perfect. Basically, the Skagit movement took spey from being the domain of the advanced angler and opened new possibilities for people who only have the chance to fish a couple times a year.”

George Cook, who’s a mega-personality in the Pacific Northwest and serves as a top rep for the fly-fishing brands Sage and Redington, says this spey movement isn’t a flash in the pan, that it’s here to stay, and that there’s good reason for that.

“In reference to fishing spey rods with sink-tip lines and heavy flies, this has brought rifle hunting into what was otherwise an archery game,” Cook laughed. “It’s revolutionized the use of those sink-tips and larger intruder-style flies in the modern age.”

Ten years after its inception, the Skagit system is the method to catch steelhead and salmon in the Pacific Northwest and line manufacturing companies are scrambling to 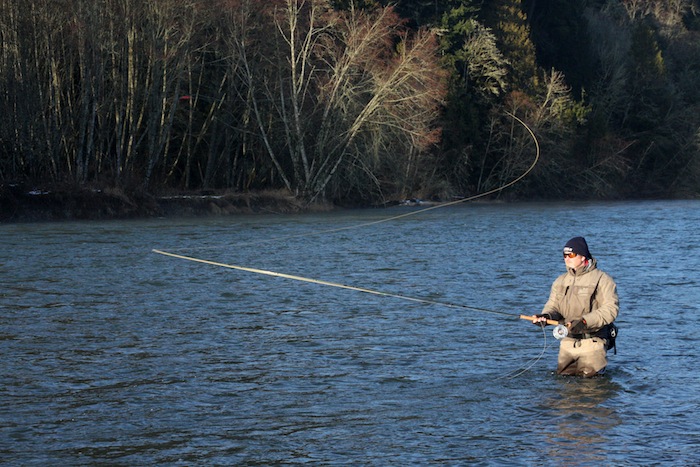 meet the needs of anglers, developing new systems each year. And the Skagit movement isn’t confined to the Pacific Northwest: it’s gaining momentum in other regions, too, from the sea-run brown trout fisheries of southern Chile, to the Atlantic salmon streams of Quebec and Russia’s far distant Kola Peninsula. According to Cook, that momentum isn’t going anywhere anytime soon.

“We saw something like this when double-taper lines created a phenomena in the spey community, but that was short-lived,” Cook recalled. “But Skagit lines are the single biggest revolution that I’ve seen in fly fishing. This one is here to stay at a level that matches or exceeds what weight-forward lines meant to the single-hand rod theater.” 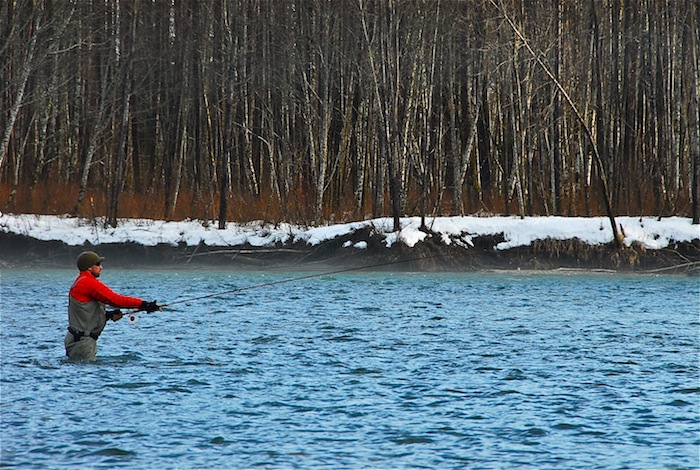 On the Skagit, where it all began.

2 Responses to The Aces of Spey