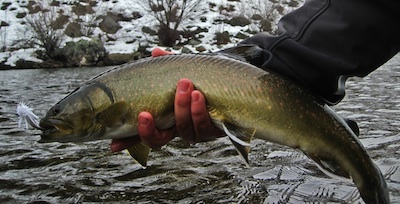 Back in January I was speaking with Nick Coe, who works with Icy Bay Lodge out of Yakutat, Alaska, a silver salmon fisherman’s paradise. He spends winters in Idaho and recently sent a text with some interesting pics after fishing the South Fork Boise River below Anderson Dam, east of Boise. 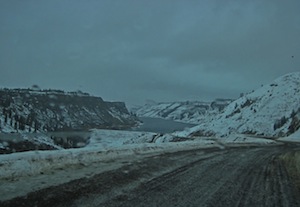 Dropping into the South Fork Boise, on a wicked cold winter day. Thanks to Nick Coe for the shots.

Now, I’ve fished the South Fork a lot, but that was mostly in the 1990s and early 2000s. At that time the rainbow population was excellent, but there were very few bull trout around. In fact, in all the times I fished the South Fork, and mind you a lot of those days were spent dredging with egg-sucking leeches for those oversized ‘bows, I only caught a single bull trout. That’s why I was surprised when, in January, during our conversation, Coe said he was catching lots of bull trout in the South Fork below Anderson Ranch. And then he sent pictures the other day, showing a bull trout that he caught.

So, instead of just wondering about it, I called Art Butts, a regional fisheries biologist for Idaho Department of Fish and Game, and I asked, “What’s the scoop on bull trout in the South Fork?”

According to Butts, he doesn’t know. But he may soon. That’s because Butts and his cohorts are conducting a population study on bull trout in Arrowrock Reservoir, which is the impoundment downstream from Anderson Ranch. That’s where, according to Butts, many of the bull trout that wind up in the South Fork spend most of their time.

“We have some electrofishing data, but it doesn’t show a big improvement in bull trout numbers in the South Fork,” Butts said. “You just don’t encounter them often, maybe two or three in an entire kilometer of the river. So we can only hope that the bull trout that anglers are catching indicates a roubound.

“We are doing a population survey in Arrowrock right now,” Butts explained, “and we see some tagged fish moving into South Fork tributaries. In Arrowrock we see bull trout that range between 18 and 23 inches, but we did see one that was almost 40 inches. Over the next couple years we are hoping to have more data and we’ll try to see if there’s a trend.”

In 2004 Arrowrock was pretty much drained and that had a negative impact on the reservoir’s bull trout (of course!) and it caused a decline in bull trout on the north and middle forks of the Boise. The South Fork, it seems, didn’t suffer the same fate, but only time and science will tell the whole story. Until then, enjoy what seems to be a spike in bull trout numbers on the South Fork and treat those fish with great care.

This entry was posted in Conservation, Idaho, Northern Rockies and tagged bull trout. Bookmark the permalink.