Broke Down in Their Driveway 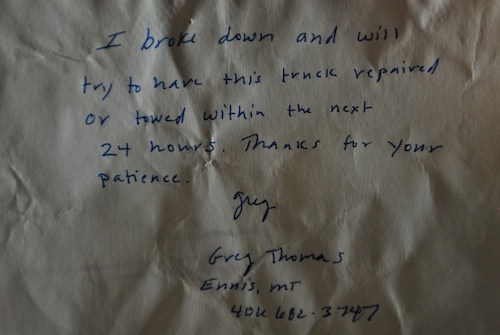 So, she wasn’t willing to drive me to the Bozeman airport. Didn’t want to get the girls up early, she said, even though it’s June and the girls don’t have school or anything else pressing. So I acquiesced, said I’d drive the ’89 Chevy, which was making weird sounds, instead of the new GMC. And that’s when I broke down, between Norris and Four Corners, at the top of a hill where I actually was able to push the truck off the road and into a long dirt ranch driveway. I managed it a little to one side, got out a pen and wrote a note. Then I called and, fortunately, she answered. All I was thinking was this: trip of a lifetime to the Dean River and I’m not going to make the first leg of the trip and I may not be able to catch up with the other guys and by the time I get there they’ll have already boarded the helicopter and will be flying over the glaciers and then looking down on steelhead heaven and B.C. West, Andrew Bennett’s killer lodge, the lowest and closest to tidewater on the lower Dean.

Long story short, I got to the airport 20 minutes before my flight was scheduled to take off and, for some reason, they let me on the plane. I should have known right then, that karma was at play. Because on that trip I met some people who I now call great friends, and I had, if I remember correctly, 13 steelhead to the beach by the end of the third day. Bliss. A few photos in remembrance of that trip. Thought you would enjoy and this is a good reminder that no matter how bad things begin on a fishing trip, they can always turn around on a dime, sometimes even on the last day. So, keep your chin up and get out there and fish. And if you can pull it off, someday, make it to the Dean River, one of the greatest places in the world for steelhead. 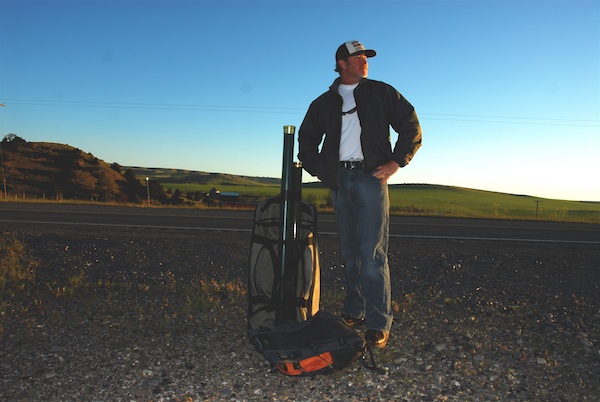 Sunrise is pretty but I'm broke down and the plane is ready to go...without me.

Now get along and spawn.

This entry was posted in British Columbia and tagged Dean River. Bookmark the permalink.