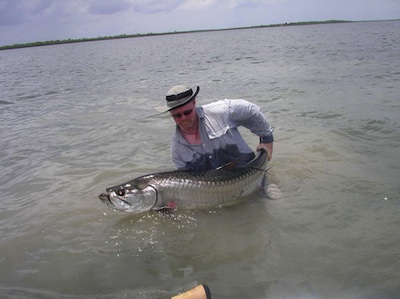 This is big news for bonefish, permit and tarpon freaks. Turneffe is one of the best places in the world to fish those species and it may be the best place in the world to catch your first permit or nail the grand slam. When I visited a few years back we landed three tarpon over 75 pounds, including two that may have gone 125 or more. Also landed lots of bones and my friend, Dan, caught his first permit. Great place to visit and protect. Hats off to Turneffe Atoll Trust for all their hard work on the behalf of anglers.

TURNEFFE ATOLL, Belize – The Turneffe Atoll Marine Reserve was enacted on Tuesday (9/25/12) by the Hon. Lisel Alamilla, Belize’s Minister of Forestry, Fisheries and Sustainable Development.  The act will manage and protect the largest and most biologically diverse atoll in the Caribbean announced Craig Hayes, Board Chairman of Turneffe Atoll Trust and owner/operator of Turneffe Flats Resort.

“This 325,000 acre Marine Reserve, the largest in Belize, will benefit Turneffe’s commercial fishermen, its tourism sector, the atoll’s environment and all Belizeans.  It has been established through the hard work and dedication of several individuals and organizations including the Turneffe Atoll Trust, the Fisheries Department, Turneffe’s fishermen and several non-governmental agencies,” he said.

Establishing Turneffe Atoll Marine Reserve makes it possible to sustainably manage the unique environmental, economic and social aspects of the area located some 30 miles off the country’s mainland.

Enactment of the new law will allow:

TAT’s mission is to drive conservation and other efforts leading to a healthy ecosystem at Turneffe Atoll supporting sustainable social and economic benefits for Belize and serving as a model for similar coastal marine environments throughout the world.

This entry was posted in Saltwater and tagged Bonefish, permit, Tarpon, Turneffe Atoll. Bookmark the permalink.