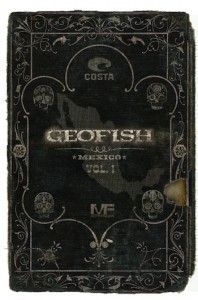 You may be 20 and single. You may be 45 and the father of two. You may be 70 with grandkids. No matter how old you might be, and whether you could ever place yourself in a situation like you are about to view, Costa’s new GeoFish project, and it’s accompanying film on a crazy rush through Mexico, is well worth checking out. That’s because we all love to fish. And we relish adventure. And we would all love to find undiscovered fish and fisheries. But many of us, because of our obligations in life, can’t take a plunge to find it. That’s where Costa, GeoFish and its crew of hard-core fish bums—formerly the AEG crew—take over. They actually put their lives on the line and endure all kinds of discomforts and danger to fish waters most of us can only dream of. I got to talk to the boys in Reno in August and they are a gung-ho crew. They like to live large and on the edge, life never getting stale, nor the fish they pursue. You can own this DVD now and my suggestion is this—do it! This is great adventure action. Check out the trailer here:

Daytona Beach, Fla. – October 12, 2012 – For the next seven years, Costa’s GeoFish project will be about one thing: exploration.  GeoFish follows a vegetable oil powered adventure fly fishing quest around the world, with the team in search of the most epic spots never fished, the ones anglers hear about but chalk up to urban legend. The first full-length feature film installment capturing this journey, GeoFish: Mexico, Vol. 1, is available now at www.costadelmar.com/explore.

Dubbed the next level in fly fishing entertainment, former creators of AEG Media and the Fly Fishing Film Tour, Thad Robison, Brian Jill, Jay Johnson and Chris Owens, star in the GeoFish series as it documents the lifestyles, adventures, mishaps, and camaraderie of four expedition anglers on an around the world epic journey.

In GeoFish: Mexico, Vol. 1, the team is in endless pursuit of out-of-the-way locations to fish, along the way being interrogated by international boarder guards, coping with severe injuries in remote jungles, vehicle breakdowns on life threatening roads and close calls with drug cartels. Some might call them crazy, but true adventure anglers call them inspiration.

While in Mexico, the GeoFish crew went in search of everything from striped marlin to largemouth bass, bonefish to barracuda, their vegetable oil powered diesel pick up truck taking them through places like Tecate, Loreto Magdalena Bay and Xcalak.

“In addition to being a story about unveiling Earth’s greatest fishing frontiers, GeoFish is about the livelihood of four Read More