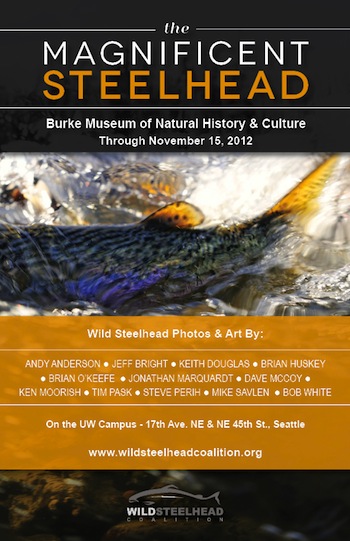 I wish I’d been made aware of this exhibit before they set it up so I could have had my Father, Fred, contribute his work, and so I could have contributed an image or two of mine. The Burke is a wonderful museum that I started visiting when I was eight or nine years old, during my father’s solo exhibits there. This steelhead exhibit would be a great one for you to go to, whether you live in Seattle or the surrounding area or care to do a little art with your traveling. All for a great reason, too: The Wild Steelhead Coalition is made up of a bunch of like-minded bad-asses who are doing everything in their power to keep that fish on the face of the earth. If you are around, support them by visiting the Burke. GT

SEATTLE – Anglers know it as the “fish of a thousand casts.” Washingtonians know it as their state fish, symbolizing the natural beauty of the Pacific Northwest. And through November 15th, the steelhead will be celebrated in an exhibit at the University of Washington’s Burke Museum to raise awareness and support for this iconic, and threatened, fish.

Titled “The Magnificent Steelhead,” the display will culminate with a reception and art sale on November 8, with all proceeds benefiting the Wild Steelhead Coalition, an organization dedicated to increasing the return of wild steelhead to the rivers and streams of the Pacific Northwest.

Visitors can also learn more about steelhead, as well as conservation efforts being taken by the Wild Steelhead Coalition to support the species through hatchery reform, scientific research and policy changes on behalf of wild fish.

The event runs from 6:30 – 8:30 p.m. and includes hors d’oeuvres from the Steelhead Diner and beverages from Precept Wine.