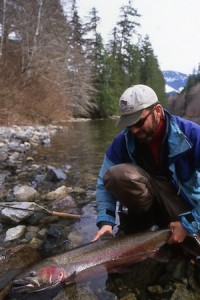 This is huge news out of Canada. This may preserve some of the finest and most remote steelhead and salmon water in the world. It’s been a big issue for a long time, and it deals with wild place close to my heart, so this takes some pressure off my mind. Read on and be happy.

VICTORIA — The B.C. government has banned oil and gas exploration in an area of northern B.C. that was the scene of anti-development protests by First Nations members seven years ago.

The province has announced a deal with Shell Canada and the Tahltan Central Council under which Shell is withdrawing plans to explore for natural gas in a region known as the Klappan at the confluence of the Stikine, Nass and Skeena Rivers.

In 2005, some members of the Tahltan were arrested during protests against exploration in the area, which the First Nation calls the Sacred Headwaters.

In addition to giving up its petroleum tenures, Shell will build a new water recycling project to support its gas development elsewhere in B.C., which will be funded by $20 million in royalty credits from the provincial government.

Tahltan Central Council President Annita McPhee says the Klappan is one of the most sacred and important areas for her people and she acknowledges Shell for its decision to give up its development plans.

She says the Tahltan are looking forward to working with the B.C. government on permanently protecting the Klappan. Read more: http://www.calgaryherald.com/news/bans+exploration+northern+aboriginal+territory/7715974/story.html#ixzz2FWVaQdio