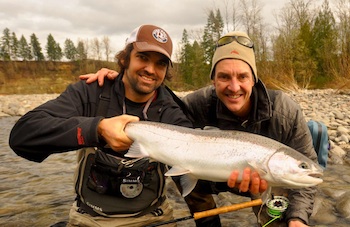 There’s something that just feels right about fishing steelhead on broad and deep coastal rivers, under cedar and spruce canopies, with bald eagles winging overhead and mist blocking out the sun—for days at a time.
That was the scene last week as I fished on the Oregon coast and slightly inland on the Clackamas River outside Portland. I was there to visit friends and speak with the Fly Fisher’s Club of Oregon and to finally fish with guide Jeff Hickman, whom I first met on British Columbia’s Dean River, whenI was flying in to fish and he was flying out after a week casting two-handers for chrome. He’d said, “You’re going to have fun,” and I’d said, “Hey, I want to fish with you sometime.” 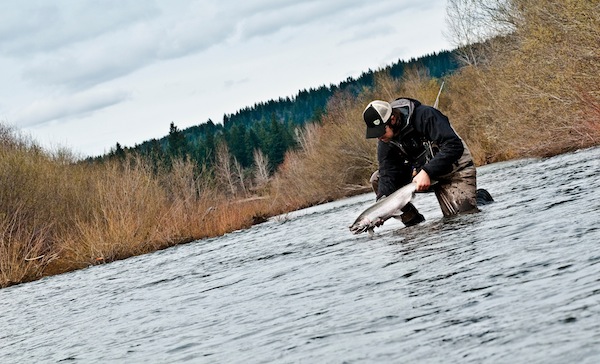 That was several years ago, but we finally made it happen last Wednesday, March 13, when I showed up at his door at 7 a.m. After gearing up, we waltzed out his back door and loaded into a 20-foot jet sled and headed downriver.

The Clackamas is one of Oregon’s best steelhead rivers and offers up wild and hatchery chrome at a decent rate. It’s lined by towering alders, birch, cedars and spruce, and the river is often contained by towering, exposed and nearly vertical dirt, clay and rock cliffs. Its runs can be long, taking an hour or more to fish thoroughly; or they can be short, meaning buckets and chutes that might hold moving fish. 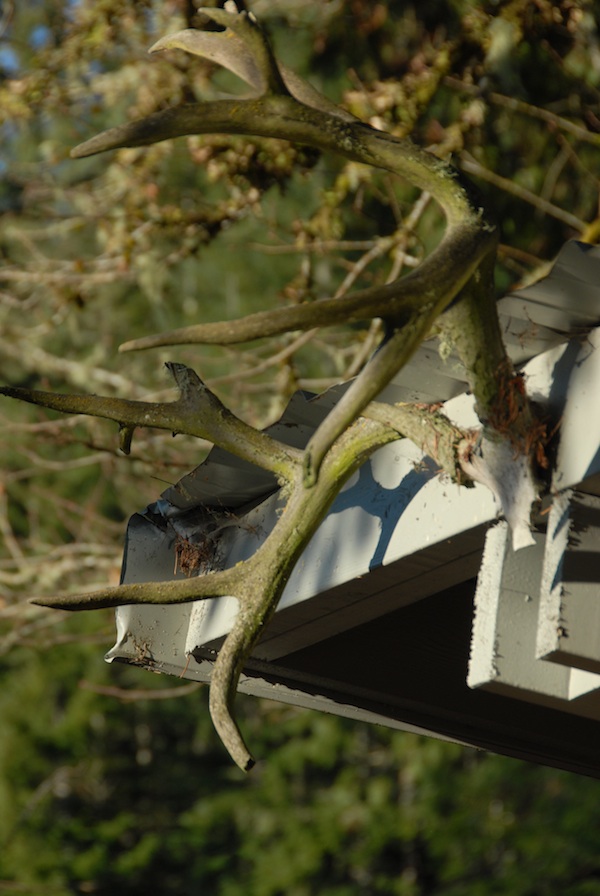 Throughout the day we charged from one run to the next swinging the fly fruitlessly for fish. Many times that day I said to Hickman, “This feels perfect. It’s going to happen.” But it didn’t.
Time wasn’t wasted. I consider myself to be a decent spey caster, meaning I can at least cover most of the water I want to  and every once in a while I’ll send a real bullet across the river. But my game is rusty, something that Hickman was quick to point out whether I was trying the classic double spey or the snap-T. While utilizing both of those casts he pointed out how much line I had on the water when I started the casting motion and warned about how that would fatigue me through the day. And, he noted where the fly was being anchored, which was not where it should have been for maximum effect. In both cases I changed my tactic and motion and found it much easier to launch the line. That’s what a good guide can do—even when the fish aren’t cooperating they’ll make sure that your day on the water helps you become a better angler. 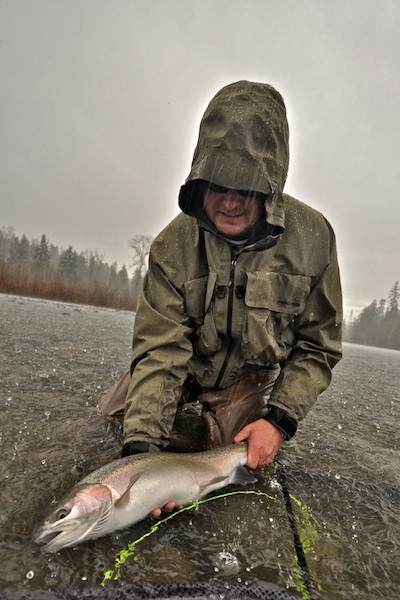 Oh, yea, the joys of winter steel. Coastal rain and rainbows returning from the salt.

Ah, but the fish … Late in the day, just after Hickman said, “It’s feeling fishy out here,” he grabbed a rod, stepped off the back of the boat (this wasn’t a true guide day, instead being a day spent fishing among friends) and on his third or fourth cast he came tight and let out a holler. Next moment, I see his line screaming past me, headed for the Columbia River. A few minutes later Hickman had a beautiful buck steelhead with two red stripes on its sides, cradled in shallow water. That fish may have weighed six pounds.
A few runs later, as light faded, Hickman said, “Greg, get out there, make it happen in the 11th hour. This is the last shot, the last run of the day.”
I staggered down the bank, made a few brutally bad casts, and then finally pulled it together and launched a few nice throws in a row. On the third of those I said to Hickman, “This feels good,” and just as the fly, a black and green Pick-Yer-Pocket, neared the bank, I felt a grab, instantly understanding that I hadn’t just nicked a rock.
After the take that steelhead cartwheeled right next to the bank, almost beaching itself. Then it slid into deeper water and worked hard against the line and the bend of the rod. A few minutes later Hickman tailed an eight-pound hatchery hen for me, a bright fish in near perfect condition. We took that fish and I marked my license, thereby giving the river’s wild fish a better chance to find prime spawning turf. Tonight or tomorrow I’ll be grilling a side of that steelhead, sharing it with my daughters, recalling a great day on the Clackamas River with a great guide. 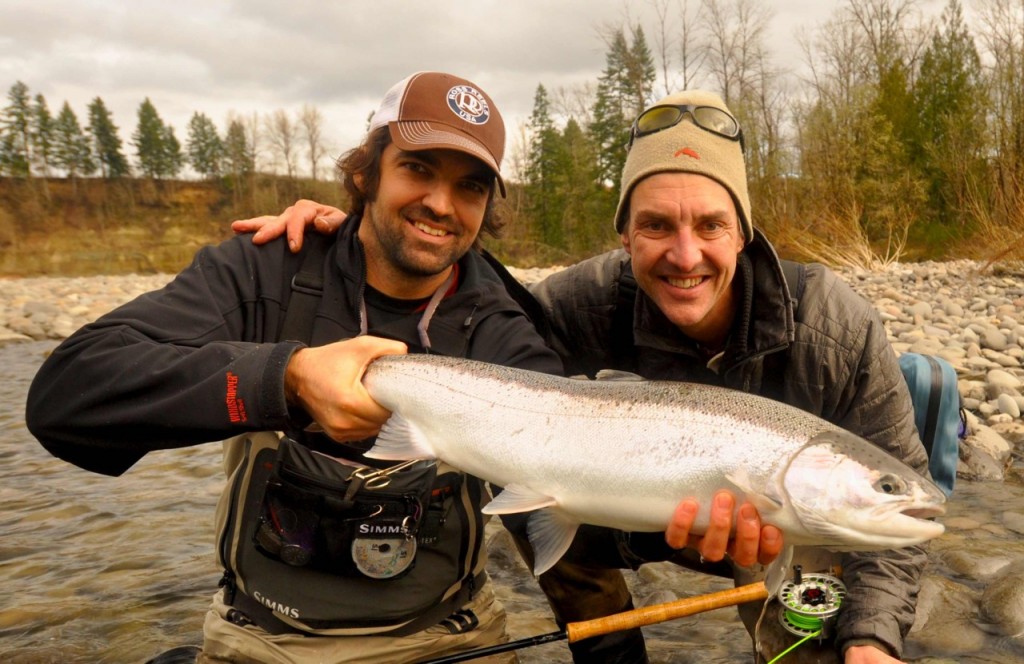 Hickman, left, with a client and awesome winter steel.

Looking to fish winter steel? If you are, you would be crazy if you didn’t consider hitting the Clackamas with Hickman. He’s mostly booked through March and April, but you might find an open day on his calendar here or there, or a cancellation day to slide in on. You can learn a lot from this hard-working and entertaining guide. He’s got my endorsement for sure. And with his jet sled, you can access a ton of water each day that the driftboat crew just can’t get to. If you can’t get in on the winter steelhead option, you might want to book a Deschutes River trip during the summer or fall. He utilizes the same jet sled and fishes the roadless area of the lower Deschutes. He knows the river as well as anyone and that is a classic place to fish. 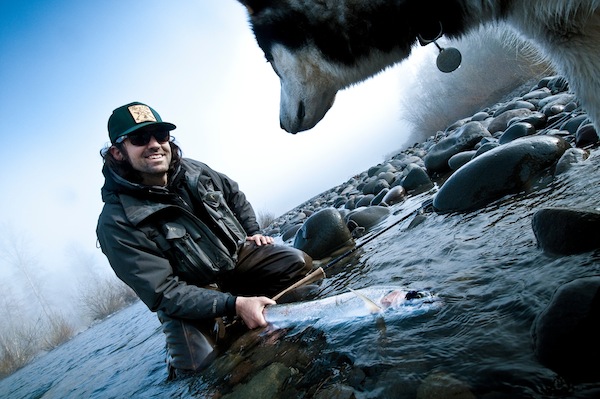 Ozzie checking out some winter steelhead. Looks good to him. Courtesy Louis Cahill.

For booking information contact Hickman at hickman.steelhead@gmail.com or give him a shout at 971-275-2269. Or visit his Web site at fishtheswing.com. Sweet pics to be seen on his Instagram account, too, handle fishtheswing

This entry was posted in Northwest, Oregon and tagged Clackamas River, Fish The Swing, Jeff Hickman, Steelhead. Bookmark the permalink.