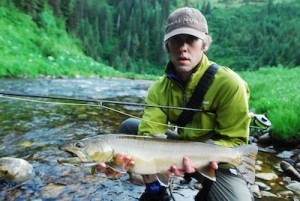 I’m a bull trout fan and it’s good news to learn that these brutes are doing ok in the Flathead River basin. I’ve seen them  and caught them on the South Fork Flathead and have chased them in other places, too. Though they don’t jump like a rainbow or eat dries like a cutthroat, they smack streamers and nymphs and they are big—it’s not uncommon to see bulls over 30 inches long and occasionally people get them in the high 30s to 40-inch range. I’ve caught them up to 14 or 15 pounds and that puts a serious bend in a five-weight. Here’s some more info, straight from The Columbia Basin Bulletin.

Bull trout spawning surveys in eight North and Middle Fork Flathead River tributaries were completed by Montana Fish, Wildlife and Parks between October 1 and October 10 and the results are encouraging.

Biologists count the number of “redds” or nests built in streambed gravels by adult bull trout from Flathead Lake. Identical sections are counted annually and represent a known portion (about 45 percent) of the total bull trout spawning in the drainage.

The entire drainage is counted every three to five years. This is the best estimate of the mature bull trout spawning run from Flathead Lake.