Chris Santella’s The Tug is The Drug fly fishing essays 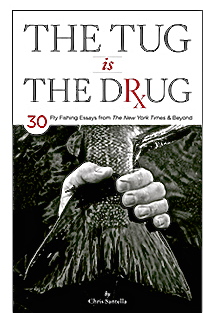 With a title that says, The Tug Is The Drug, you know that Chris Santella gets it. I’ve fished with this boy, listened to him sing and strum a guitar, and I’ve swilled a few during the down moments, ranging from overnights on the Deschutes to prowling the flats around Bimini for giant bonefish. Here’s a collection of some of Santella’s best work and it doesn’t cost much for the read. When you buy this collection you are getting a great read and you are supporting the fishing fever of an even greater guy. Check it out.

FUNNY, THOUGHTFUL ESSAYS
FROM FLY FISHING’S TOP TRAVEL WRITER
THE TUG IS THE DRUG
30 Fly Fishing Essays from The New York Times and Beyond

You may know Chris Santella as the author of Fifty Places To Fly Fish Before You Die, Fifty More Places To Fly Fish Before You Die and a host of other “Fifty Places” books. The Tug is the Drug collects Santella’s first-person fly fishing narratives – including many stories that first appeared in The New York Times.
These thirty pieces take readers from leaping makos near the fairways of Torrey Pines to midnight Atlantic salmon fishing on the fabled Ponoi to encounters with very friendly mujeres on the streets of Havana… and even offer an unauthorized (yet unequivocal) account of Bob Dylan’s 1970s obsession with fishing.
Chris Santella is one of the the most well-traveled writers in the history of the sport of fly fishing. His peripatetic lifestyle and eye for entertaining details—even those that have little to do with the act of throwing flies at fish—hold the attention and make us look at fishing in a whole different way.
The people and places that Chris writes about–fishing’s notable characters, oddballs and outcast experts, and places that inspire and sometimes intimidate the average angler—define a horizon that most fly fishers will never reach, but Santella brings it all into the foreground.

About the Author
Chris Santella has more than 600,000 hard cover books in print. In addition to his book writing, he is a regular contributor to the New York Times, Fly Rod & Reel andTrout, and has also contributed to The New Yorker, Robb Report, Travel & Leisure, Travel & Leisure Golf, Golf andLinks, among other publications. A graduate of Middlebury College and the Yale School of Management, Chris continues to work with select marketing clients, which include conservation, tourism, software and renewable energy entities. His two “Fifty Places” fly fishing books are being adapted for television by the World Fishing Network as Fifty Places to Fly Fish Before You Die, which will premiere in the 1st quarter 2015.

The Tug is the Drug is available in electronic format (.mobi and .epub) for all mobile devices and personal computers.