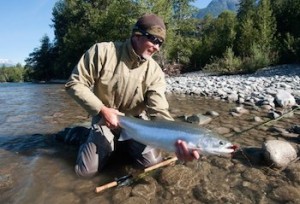 The news isn’t good out of British Columbia as a recent court ruling gave the Gitxsan Treaty Society the ability to do whatever they want with pieces of land along the Skeena River, which is one of the best places in the world to fly fish for steelhead. The impacts to lodge owners, anglers, and the fisheries could be significant. Here’s a detailed report from the Globe and Mail on the decision and the actions of the Gitxsan and how that might influence fisheries and access decisions across British Columbia.

BRITISH COLUMBIA
In a startling announcement last week, the Gitxsan Treaty Society in Hazelton declared that sports fishermen are being “evicted” from the area, along with the forest industry and CN Rail.

“This eviction notice affects all sports fisheries on the Skeena River and tributaries, all forest activities … and CN Rail,” declared the Gitxsan. “All are expected to vacate and cease activities on Aug. 4, 2014 until both Crowns have obtained the required consent of the Gitxsan Hereditary Chiefs.”

The notice flows from the recent Supreme Court of Canada decision that underscored the aboriginal title and rights of the Tsilhqot’in. And it gives credence to those alarmists who said that landmark ruling was going to create chaos in B.C.

First Nations blocking resource companies from mining or logging is one thing. But in announcing they are evicting sports anglers – presumably with hunters, campers and hikers soon to follow – the Gitxsan have expanded their fight to
include, well, just about everybody.

The latest pronouncement is not going to sit well with the 300,000 British Columbians who buy sports fishing licences each year. And it’s certainly going to raise concerns with the 5,000 people who make their livings from catering to the sports fishing crowd, which generates about $546-million in direct economic impacts yearly in B.C.

Al Martin, of the B.C. Wildlife Federation, said the Tsilhqot’in case is a game changer and the Gitxsan declaration is unsettling, but he advises fishermen and hunters not to panic.

“Well, the landscape has just changed from being Crown land and private land, to Crown land, aboriginal title and private title so I think that hunting and fishing will change across the province. I guess the question is: How will it change?” he said. “Hopefully this [Supreme Court ruling] will give us an opportunity to ensure the changes are positive in terms of the sustainability of wildlife and still provide opportunities for First Nations and non-First Nations alike to participate in hunting and fishing.”

Mr. Martin and other officials from the B.C. Wildlife Federation met recently with three top ministers to discuss the Tsilhqot’in case and its implications for hunting and fishing.

But he didn’t get a lot of answers.

“Clearly, government is trying to get their mind around that [court decision],” he said. “It’s early days. It’s clear there is a lot of work to be done to figure out the implications of this as you translate from the judgment level of the Supreme Court to how things will actually work across landscapes and watersheds and how it will affect the use of resources, including fish and wildlife.”

Mr. Martin said the government is still trying to find its way on this complicated file.

“I think it’s going to be a busy summer, for sure,” he said of the work that needs to be done in the wake of the ruling.

Gwaans, whose English name is Bev Clifton Percival, head negotiator for the Gitxsan, said sports fishermen were included in the eviction notice because “it’s a revenue maker for the province,” and because the Gitxsan Treaty Society has “never [given] consent for the sports fishermen on the Skeena and its tributaries.”

Probably no First Nation anywhere in the province has ever “given consent” for fishing or hunting. But non-native people have been fishing and hunting since they first arrived and they are not going to lightly accept the idea that they can’t catch a salmon or shoot a deer without getting approval from First Nations.

But that is where the Gitxsan apparently think this is headed.

For the provincial government, the inclusion of sports fishermen in a debate which until now has centred on specific industrial activities means that the political stakes have been raised dramatically. Industry doesn’t vote – but fishermen do. And they will want this mess sorted out soon.