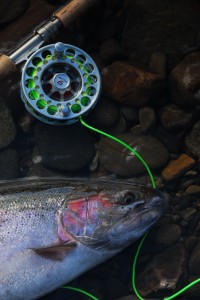 Hey scribes, here’s a great way to see where you stand with your literary skills, but you better hone that pencil tip soon. That’s because Trout Unlimited just launched a writing contest about wild steelhead with entries due November 11. Winning prize is the ability to brag about your accomplishment, plus $1,000 cash. Bonus: your essay will be published in Trout Magazine. My suggestions: don’t write in detail about a great fight from a particular fish, or the day you landed five and life was great, and don’t even think about describing a pretty sunset on a day when you didn’t catch a fish. Think broader terms, why wild steelhead are important to Northwest culture; why protecting wild steelhead, in turn, protects their habitat; why an opportunity to fish wild steelhead is worth preserving for yourself, but also for your kids; also the opportunity steelhead provide to bond with brethren in a common goal, in the outdoors. Those are the points that make wild steelhead pertinent and any of those could be used to craft a great essay around. Have fun. E-mail me or make a comment if you need any pointers or suggestions. GT

SEATTLE–Trout Unlimited today launched an essay contest open to the angling public that will net the winning author $1,000 and a spot in an upcoming edition of TROUT Magazine. Essays must focus on wild steelhead and must be no more than 500 words to be considered for the top prize. The winning essay will be read aloud at TU’s Nov. 20 launch of its new Wild Steelhead Initiative in Seattle.

“We’re looking for good stories about wild steelhead and why so many of us are willing endure even the worst conditions – frigid water, rain, sleet, snow – for hours, even days at a time in hopes of catching just one of these amazing fish,” said Shauna Sherard, TU’s northwest region communications director. “Wild steelhead have captured the souls and imaginations of American anglers for generations. Surely there are stories to tell, and TU wants to help die-hard steelheaders tell them.”

Wild steelhead in the Pacific Northwest still persist, but 70 percent of the region’s stocks require federal protection. TU’s soon-to-be-launched campaign will focus on improving wild steelhead numbers and the opportunity for anglers to pursue them. Until now, efforts have been focused on local watersheds and specific runs of wild steelhead. TU hopes to shine some much-needed light on the challenges wild steelhead face if they are to once again swim in historic numbers from southern Alaska all the way to southern California.

Interested writers–published or not–can learn more about the contest on TU’s website. Entries must be submitted to Sherard by Nov. 11 to be considered.

Trout Unlimited is the nation’s oldest and largest coldwater fisheries conservation organization dedicated to conserving, protecting and restoring North America’s trout and salmon and their watersheds. Follow TU on Facebook and Twitter, and visit us online at tu.org.