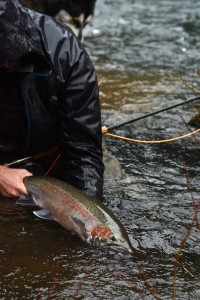 I was checking out my Friday edition of Columbia Basin Bulletin and figured all of you would be interested in this. I’m not a proponent of hatchery fish so you know where I stand on this—smack all of them.

the Washington Fish and Wildlife Commission at its Dec. 12-13 meeting in Olympia. The proposed rule is among a number of sport fishing rules the state will consider for next year, all targeting actions in the Columbia River basin.

The Commission will make its final decision at its January 2015 meeting on proposed regulations for the 2015-16 fishing season (http://wdfw.wa.gov/fishing/regulations/rule_proposals/).

This is not the first time Washington has considered a regulation to require retention of hatchery steelhead.

The state already requires anglers to keep hatchery steelhead on some tributaries of the upper Columbia River, such as the Methow River in the northeast Cascade Mountains, and on the Tucannon River, a tributary of the Snake River.

The proposed rule will expand that requirement mostly to streams in the southeast region of the state. It is designed to reduce the negative impact hatchery steelhead could have on local populations of wild steelhead if they are allowed to spawn with wild fish.

The new rule is designed to reduce the negative impact hatchery steelhead could have on local populations of wild steelhead if they are allowed to spawn with wild fish, and the rule does this by requiring people to harvest hatchery origin fish, said John Whelan, eastern regional fish program manager for the Washington Department of Fish and Wildlife. He is located in Spokane.

He explained that WDFW wants the proportion of hatchery fish spawning with wild fish to be less than 30 percent.

Whelan concedes that most anglers already retain hatchery origin steelhead that are marked by a clipped adipose fin. This proposed rule would ensure that hatchery steelhead are retained. That could be as many as three hatchery steelhead per day on the Grand Ronde River.

Yet Idaho and Oregon, which share waters with Washington, have never considered the rule, according to representatives from those states.

“We have no regulation requiring anglers to keep any fish,” said Steve Liebenthal, public information specialist at Idaho Department of Fish and Game. “We have encouraged anglers to keep non-native species such as rainbow trout on the South Fork Snake River by taking off limits, but have never required harvest of any species.”

Oregon’s Rick Hargrave, public affairs with the Oregon Department of Fish and Wildlife, said he’s “not aware of any plans within the agency or by any organization to introduce such a regulation.”

Washington’s proposed rule cites several reasons for adopting a retention requirement of hatchery steelhead. According to the rules:

– Hatchery steelhead have lost most of their productivity and when they spawn with wild steelhead they reduce the overall production of steelhead in the river.

– Hatchery steelhead also spawn together and their fry compete with wild fry for food and space.

Currently, the rule on the lower 2.5 miles of the Grand Ronde River is for catch and release of steelhead. The new rule will allow retention of hatchery fish, but would not require it. The new rule would go into effect above the 2.5 mile limit.

The rule is an outgrowth of Washington’s Steelhead Management Plan which describes a need to increase the harvest of hatchery steelhead in order to reduce the impact on steelhead that are listed as threatened on the federal Endangered Species List.

This entry was posted in Northwest, Washington. Bookmark the permalink.