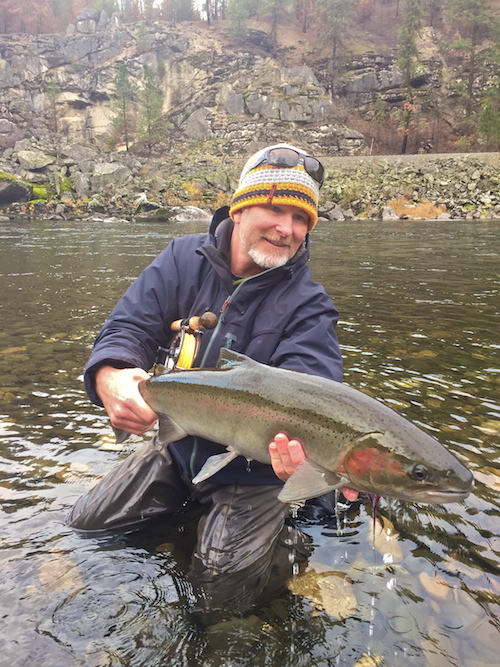 Giving yourself 24 hours to catch a western steelhead isn’t exactly stacking the odds in your favor. Especially when you spend seven of those driving and eight sleeping. But that’s what I did this weekend, leaving for Idaho after coaching a girls basketball game on Saturday. Had a good nights sleep in a camper and hit the water at 8 AM and spent the entire morning trying to drag chrome out of a great run. No go. And it didn’t help that I kept getting low-holed by jerkers.

Switched locations around noon and fished some water that looked semi-appealing, but definitely not the kind of water I’m used to finding fish in. It was a little shallower and faster thanI like, but it held a lot of boulders and slab rock that a steelhead could settle in behind. So I fished the little buckets and boulders as thoroughly as I could. During one swing I felt a tap. Too deep out there to hit bottom, I figured, so I yelled downstream to my friend, “I think I may have just missed a grab.” Then I walked upstream a few yards and tried to repeat the cast. Just as the fly was swinging out of the bucket I felt the line tighten, followed by a couple quick headshakes. No doubt there! Fish on. 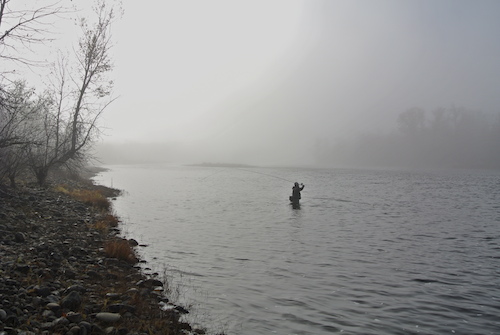 Early morning mist. Great to be on the water on such a beautiful day. When the mist burned off the steelhead rolled.

This steelhead, a native, made one great jump and then raced across the river. It jumped again, then took refuge in some boulders. I felt the line hit a boulder but the fish stayed on and shortly after we corralled it in the shallows. Every time I catch a steelhead it feels like a little miracle and this was no different—24 hours with the goal of getting at least one fish. Mission accomplished. And now, like always, I want more of the same. You know the feeling. 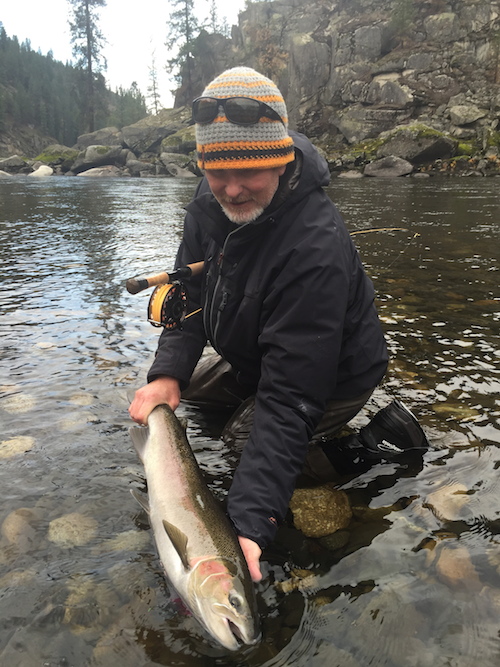