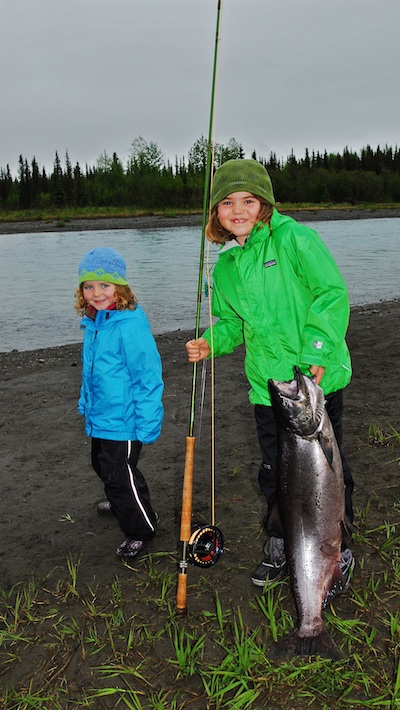 I’ve never reposted content, but I feel inclined to set this piece at the top of the stack again. It’s that important. This post was first seen in 2013 and it is one of the most read pieces on Angler’s Tonic. Nothing has changed. Costco still sells farmed Atlantic salmon from nasty net pens. Nova Scotia, New Brunswick and Quebec are all in major battles to preserver wild Atlantics. Norway is the problem that it has always been. Give this a read. Do something about it—only eat wild salmon, Alaska-caught being the most sustainable option. Think about buying and eating wild pink salmon instead of kings. Pinks can be found in abundance. Kings are suffering. If not kings, try wild reds/sockeye from Bristol Bay, Alaska. Here’s the read.

I joined a great group of people last Friday night at Jax, a noted seafood restaurant in downtown Denver. It’s a hip kind of place with a raw bar for the post-work, drop-in crowd, and tables scattered around for those who want to go a little bigger and order a full meal. With nine at the table, we fell into the later crowd.

When the menu arrived I noted fresh salmon as an option so I asked the waiter the  standard question that I ask every time salmon is touted on a menu: Is your salmon wild or farmed?

He started in on the, “It’s farmed, fresh, and really good,” angle. I just raised an open palm to him and said, “Stop. Whatever you have to say about it isn’t anything I want to hear and I’ve done my research so I won’t agree with you. You would just be wasting your breath and our time if you continue.”

“But this farmed salmon…,” he continued before, again, I interrupted with an open palm—as in stop! “Where does your Dungeness crab come from?” I asked. I wanted him to know that farmed salmon doesn’t have a place in my diet and there is nothing that he, nor the farmed salmon industry can say to change my mind. I’m that resolute. 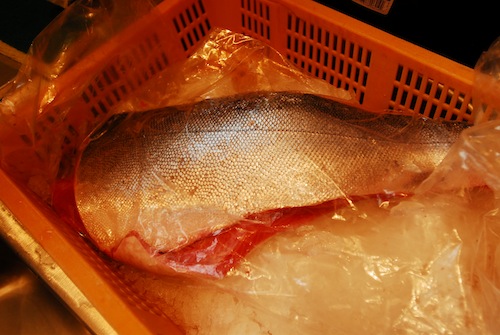 Here’s what real, wild Alaska salmon looks like. Note the natural deep red flesh coloration. That is pure health right there, tasty and full of Omega 3.

A little while later the head chef approached our table and I saw him kneeling and speaking with a gal who spearheads the Western Native Trout Trout Initiative. Obviously my words had infiltrated the kitchen. After the chef left our table discussed the horror of farmed salmon. Then the waiter arrived with a notecard that explained the “merrit” of farmed salmon. One line really caught our eyes; it said, We don’t feed drugs to our fish until they become sick. If that isn’t an ultimate indictment of farmed salmon, I don’t know what is.

The notecard didn’t mention which drugs the farmed salmon industry feeds their fish. Nor did it explain that a farmed salmon’s flesh would be a clear color if it were not fueled with artificial dyes. Nor did it say anything about the incarcerated salmon, held in net pens on the coast of British Columbia, that are infecting wild fish with various diseases and fouling once near pristine saltwater. Nor did it mention the same situation in eastern Canada where the “aquaculture” industry is severely threatening the existence of wild Atlantic salmon. In addition it didn’t mention that by serving farmed salmon the restaurant, Jax, was making a clear statement that it doesn’t support wild fisheries, nor the habitat required to propagate wild salmon. By serving farmed salmon they were 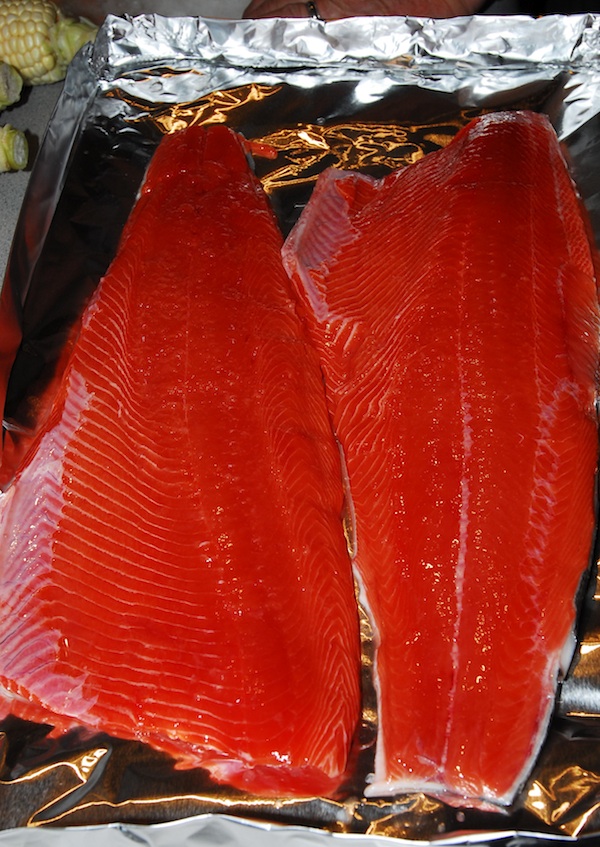 Here are wild Alaska salmon fillets ready to go in the oven. No fake coloration here—unlike farmed salmon, wild Alaska salmon gain this coloration naturally from what they eat in the ocean, meaning herring, shrimp, krill, etc. If you were to eat this wonderful salmon every day of your life you would likely be a smart, happy and long-lived person.

saying that the people who rely on wild salmon for their existence, including First Nations people in British Columbia, natives in Alaska, plus all the commercial fishermen in Bristol Bay, Alaska, and elsewhere, aren’t worth anything. And, of course, they were saying that we anglers, who fuel a thriving tourism economy in the Northwest and eastern Canada—that’s largely based on wild salmon and the wild places they require as essential habitat—aren’t worth anything. Ditto for all the animal species that also require the clean, cold water and pristine habitat that salmon rely on. That would be moose, grizzly and black bears, seals, sea lions, foxes, blacktail deer, eagles, herons, otters, mink, wolves, caribou, etc. Basically, Jax was saying they don’t believe in the natural food chain and the wild outdoors.

I have to give Jax’s chef credit, however. As we left the restaurant I garnered his attention for about a minute. He listened as I said, “If you have kids who you want to enjoy the outdoors, and you support wild places and habitat, you’ll take a look at your menu and change from farmed salmon—which pollutes wild fish with disease and parasites and offers no health advantages to your clients—to wild and sustainable Alaska salmon.” I added, “In order to protect the places where salmon exist we have to explain to politicians who implement policy decisions that saving wild salmon and their habitat makes extended economical sense. If you serve farmed salmon you are saying that wild salmon don’t mean a thing and you don’t care if your kids have the outdoors opportunities that we grew up with. Plus,” I concluded, “It makes a lot of sense for you to serve wild Alaska salmon. By doing so you can garner a higher price, a better margin, and you can tout the health benefits of that fish to your clients. They will likely be repeat customers because they’ll understand that Jax took care of their health rather than serving an inferior, unhealthy fish, and that Jax actually cares about the environment and natural systems.”

The chef nodded and said, “I get it. I really do. And we’ll look at the menu and see if there are changes we can make.”

My questions to all of you are these: Do you agree with my position on wild Alaska salmon versus farmed salmon? Do you understand what farmed salmon is doing to our wild fisheries? And, would you stand up like I did and make a statement to every restaurant that serves farmed Atlantic salmon?

I’ll keep you posted on this story and follow up with Jax to see if changes are made. And of note: you can’t walk right down the street from Jax to McCormicks either—their menu offers cedar roasted (farmed) Atlantic salmon. I checked out other restaurants in the Denver area and, unfortunately, I could not find a wild salmon offering, which makes it even more pertinent for Jax to separate themselves from the masses and do the right thing. If  you know of a restaurant in Denver that serves wild Alaska salmon, please let me know and I’ll share that information with our followers.