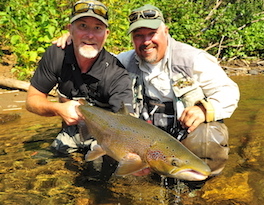 If you haven’t fished eastern Canada’s Atlantic salmon you’re missing out. These fish are the equal of our western steelhead and grow to larger size. Fish them early in the summer and they are chrome bright rockets. Wait until late August or early September and you’ll find a mix of fresh fish and some that have been in the river for a month or more. You can still get them, and get them good, but the later you wait the more likely it is that you’ll go underneath with sink-tips. Here’s recent news from ASF on efforts to protect these fish. GT

ST. ANDREWS, N.B. – The Atlantic Salmon Federation (ASF) welcomes news from The Honourable Hunter Tootoo, Minister of Fisheries and Oceans (DFO), that wild Atlantic salmon stand to benefit from the investment of $197.1 million to be spent over five years to increase ocean and freshwater scientific research activities.

“Since the unprecedented Atlantic salmon declines in 2014, public pressure on the Government of Canada to take action on the recommendations of the Ministerial Advisory Committee to reverse the decline has never faltered and now we have an announcement of tangible support from DFO,” said Bill Taylor, President of ASF.