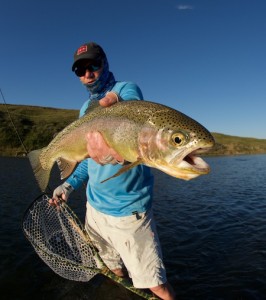 I love this debate, which is back in the forefront with an article from Outside magazine (see below): Do fish feel pain?

Come on. I ‘ve heard this nonsense, over the years, that fish don’t feel the sting of a hook. And I’ve always responded to that declaration with this: Then, why do they jump so high?

I am a big Nirvana fan, but Cobain had it wrong when he screeched, “It’s ok to eat fish because they don’t have any feelings.” Fish feel pain. That’s clear. You ever see how they react when you nick one with a gaff? They go batshit crazy. To me, the argument isn’t whether fish feel pain or not. The point is, it doesn’t matter if they feel pain or not because without anglers pursing them they wouldn’t even exist. There’d be no economic advantage allowing the politicians I vote for to stave off consumptive interests that would bulldoze and pave every inch of a riverbank for the development of subdivisions and personal trophy homes.

When I put myself in the fish’s shoes, clearly I would choose some pain over the end of my species. Maybe the best way I can articulate this is to ask you to put yourself in your own shoes: would you refuse a tetanus shot if you’d shredded half your arm with a rusty saw? Would you refuse surgery, say for appendicitis, if you were going to otherwise die from peritonitis?

If the fish could speak I think they would say, Come on man, let the people fish.

FROM OUTSIDE Ask any experienced angler about their fishing, and you’re liable to get a single reply: the fight. To set your hook in a trout’s lip is to invite an arm-wrestling match against a subaquatic bowling pin made of primal rage. It’s why many of us fish.

In the midst of that adrenaline rush, it’s safe to say that few pause to wonder what it must feel like to be on the other end of the line, struggling against the tug of a metal hook impaled through your lip. Does it hurt? Do the creatures suffer when they begin to asphyxiate as they’re held out of water for the requisite photo?

These are the questions Brian Key sought to answer earlier this year. In a commentary for a new academic journal called Animal Sentience, the developmental neurobiology professor at the University of Queensland determined that fish lack the brain structure required for feeling pain. “What then do noxious stimuli”—that is, painful events, like getting pierced with a hook—“feel like to a fish? The evidence best supports the idea that they don’t feel like anything to a fish.”

Key’s line—the same one grandfathers have told kids casting into lakes for generations—may have seemed innocuous, but the opinion set the sleepy field of ichthyology, or fish zoology, on fire. His paper struck a nerve with animal pain researchers, garnering more than 40 formal responses from academics around the world—and all but READ MORE FROM OUTSIDE

This entry was posted in Conservation, Culture and tagged do fish feel a hook, It's ok to eat fish because they don't have any feelings, to fish feel pain. Bookmark the permalink.

One Response to Do Fish Feel Pain? Come on Man.