One of the Pacific Northwest’s best fish is the sea-run cutthroat, which can be caught in the saltwater and in freshwater streams and rivers. As you probably already know, this is one of my favorite fishes. They are aggressive and live in a world where they are surrounded by predators. Somehow they survive, meaning they are fighters. 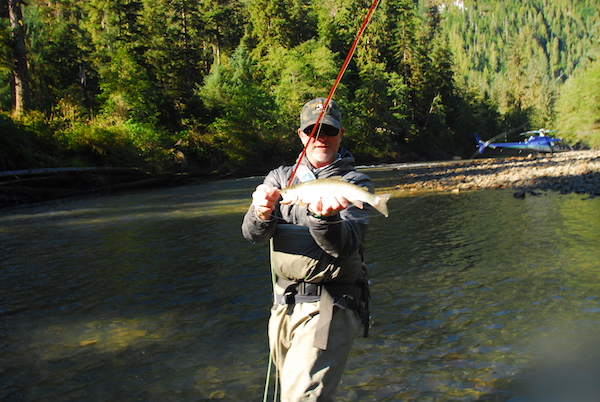 I like fishing them in rivers, but I prefer stalking the Northwest’s saltwater beaches and sight casting to them or, if not technically sight casting, at least casting toward their rises, trying to guess which way they are headed.

They’re not giants. A great sea-run cutt runs measures 16 or 17 inches long. Five pounders are possibly but that is one of the fly fishing’s greatest challenges.

I was going through images last night and found these shots of some solid sea run cutts that a friend and I caught during a trip to Nemo Bay a few years ago. We hustled from one river to the next in a helicopter, landed on towering peaks for lunch, and caught sea-runs, dollies and silvers until our arms fell off. Good times.

Spring is coming and that is a good time to go after cutthroats. They’ll be piled up at the mouths of the Northwest’s rivers pounding salmon fry that are exciting the rivers. So get a few fry patterns tied up and be ready. Great fun from the beach.

This entry was posted in Northwest, Uncategorized and tagged fly fishing the Pacific Northwest, sea-run cutthroat. Bookmark the permalink.