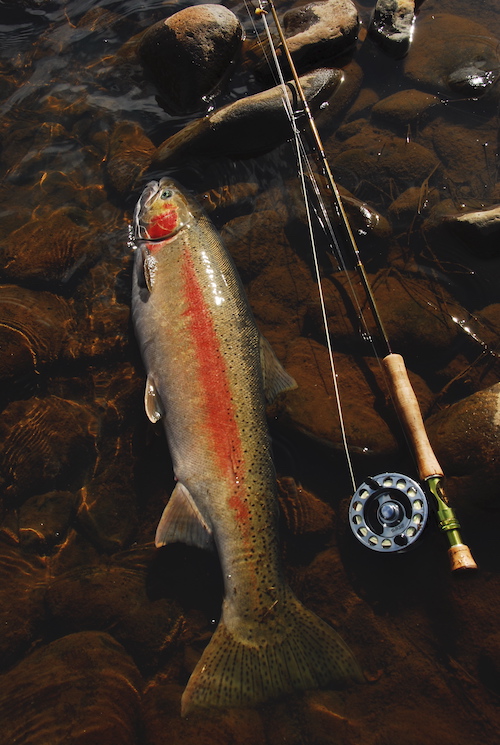 A dead hatchery steel on Idaho’s South Fork Clearwater, which will close to fishing, along with the mainstream Clearwater and Snake rivers, on Sept. 29.

To date, steelhead returns for 2019 are approximately 11 percent of the 10-year-average at Lower Granite Dam.

From Eric Crawford, Trout Unlimited:  The Idaho Fish and Game Commission announced today that they would be closing the Clearwater River to steelhead fishing effective Sept. 29, marking the first time in decades that the Clearwater has been closed to anglers.

Returns of salmon and steelhead are on track to be one of the lowest on record, creating a long-term problem for recovery of these iconic species. All of this comes as the governor’s work group on salmon recovery meets in Lewiston, Idaho for its third meeting.

“This should be a very strong signal that it is time to get our act together on restoring these fish populations,” said Eric Crawford, north Idaho field coordinator for Trout Unlimited. “We don’t have a lot of time left to get it right. Anglers are losing more and more opportunity in Idaho and that impact is not isolated or insignificant.

“Unfortunately, anglers and the guides and businesses that depend on these fish need to prepare themselves for the fact that this is a multi-year issue,” said Crawford who is based out of Lewiston. “We’re looking at significant losses in future production. It’s not just a wild fish issue. This impacts hatchery populations as well.”

Historically salmon and chinook returned to the Snake River Basin by the millions. But by the 1990s, sockeye, spring/summer and fall chinook and steelhead were all listed as threatened or endangered by the Endangered Species Act.

To date, steelhead returns for 2019 are approximately 11 percent of the 10-year-average at Lower Granite.

“Trout Unlimited is a science-based organization and the science increasingly shows that the best way to recover robust and fishable populations is to remove the four Lower Snake River dams,” said Kira Finkler, director of Trout Unlimited’s Idaho Water and Habitat Program and member of the Governor’s working group on salmon recovery. “That said, we want to find solutions that work for people as well as fish. If there’s a way to recover populations without dam removal, then we’re willing to listen. We refuse to be the ones who let this iconic species slip away because we weren’t bold enough to find creative solutions or pragmatic enough to work collaboratively.”

Trout Unlimited, with partners and volunteers, has put millions of dollars on the ground in Idaho restoring and reconnecting important salmon and steelhead habitat.

“Let’s be clear that we’re not here to just avoid extinction,” Crawford said. “We envision a day where fish once again return by the hundreds of thousands, where angling opportunity is abundant and communities all benefit from that abundance. It won’t be easy. But doing nothing is not an option anymore. The status quo does not serve anyone in the long run — not the angler, not the farmer, not the dam or barge operator. Today’s announcement just underscores the importance and urgency of moving forward toward creating a plan that works for all.”

Closure details are as follows:

The following areas will close to steelhead fishing at midnight on September 29, 2019.

This entry was posted in Conservation, Idaho. Bookmark the permalink.