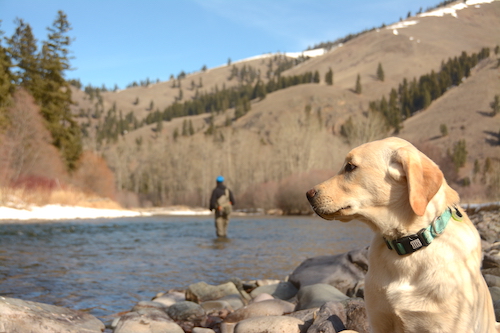 Weatherwoman said sixty-something today in western Montana, which is absurdly warm for this time of the year. So, I threw responsibility down the tube, called a friend and said, “Rock Creek today.”

Neither one of us was totally irresponsible—we both had to be back in Missoula before 3 p.m. to pick up our daughters from school. But we deemed a trip to the Creek as worthwhile, even if we couldn’t fish as long as we wanted to, and likely would miss out on some late afternoon dry fly action.

Didn’t really matter because, for me, this was a maiden voyage so to speak, a first fishing outing with my new bud, Rye. Picked him up in Kooskie, Idaho several weeks ago and this boy has been coming along nicely. He’s smart, and eager to please, and totally relaxed compared to my previous Labs. I cross my fingers and hope that things will continue to progress this way. 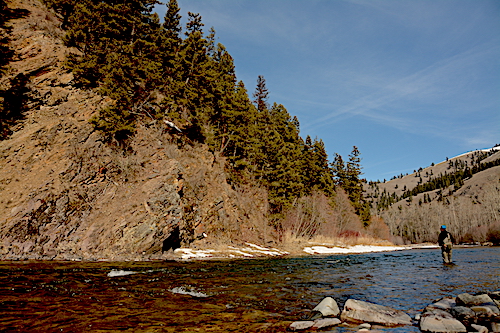 Today was perfect for Rye—he got to lounge on the backseat of my friend’s pickup and he got to chew on every stick he saw. No real rules until we got close the water, and then I had to keep a keen eye on him so he wouldn’t fall in and possibly get swept into a logjam. I really didn’t need to worry because this Lab doesn’t like the water . . . yet. I coaxed him to join me in the water but he kept to shore. One time he took a leap of faith and launched from shore to an exposed rock that was no wider than a shoe box. Somehow he perched on four big paws and didn’t slip off. 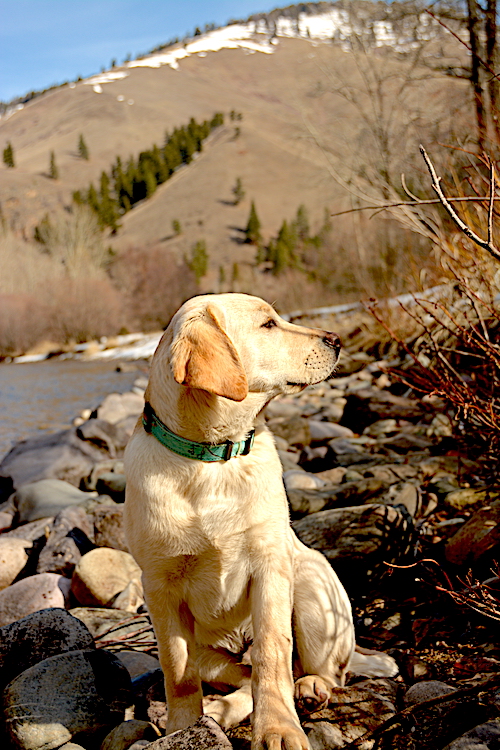 Rye, keeping watch for lions and bears, or just wondering what the world’s all about.

Fishing? It was pretty good for the short time that we fished. I landed two rainbows and a brown and my friend, Randy, landed two ‘bows and big whitefish. Did we fish for an hour and a half? Maybe, but it could have been shorter than that. If we’d fished through the day I feel  like we could have landed a dozen or more each. A midge hatch was just getting going when we checked the clock and Randy said, “We better go.”

It’s been a long time since I’ve fished with a dog and this was a reminder of how satisfying the experience can be, when dogs mind around the water. Right now, Rye is a gem. Stays out of the water, sits and stays on command, and he doesn’t bark. This was the first of, hopefully, hundreds of days we’ll spend on the water together and I thought I’d share a few images with you. Hope you enjoy. —GT 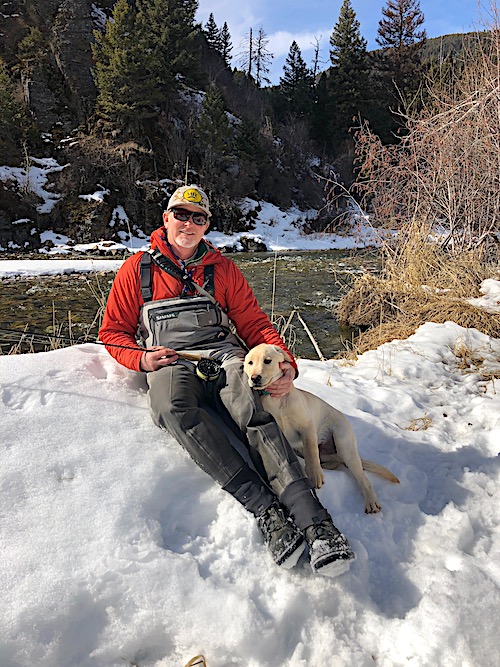 First day on the water with Rye. He’ll grow into those paws one day.

This entry was posted in Culture, Montana, Uncategorized. Bookmark the permalink.