All Time 10 Best Fly-Fishing Nymphs for the Rocky Mountains 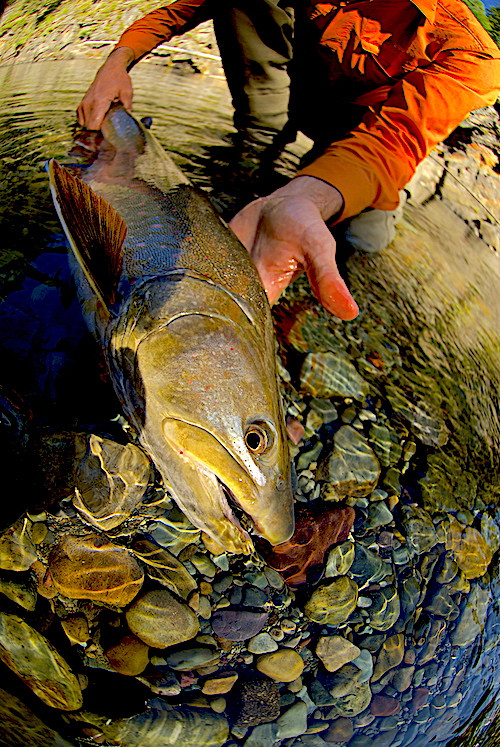 Opinions on the greatest nymphs of all time are as ubiquitous as the people who now fish them. In fact, over time nymphs have only gained popularity as anglers learn that trout conduct 90 percent of their feeding under the surface. So, you can sit around in the grass all day, hitting that calabash-style pipe of yours and wait for a hatch, or you can tie on nymphs and actually fish. Your choice of course, but if you opt for the latter, here are some of the most effective nymphs you could ever knot to the end of your tippet. These should work well this summer on your homewaters and elsewhere if we are allowed to travel and fish.

You can keep your beadhead squadrons tucked into their neat little rows. If I need a mayfly imitation I’ll dig into my own box, grab a sparsely tied traditional Flashback Pheasant Tail Nymph, andtake my chances on any trout that swims. How can I be so 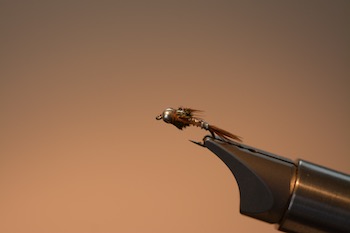 A go-to during all mayfly hatches and, if tied in large sizes it’s a good stonefly imitation, too.

confident that some of the wariest trout in the world will still give this old classic a fresh look? Because I spent six years fishing south-central Idaho’s Silver Creek with this pattern and it destroyed trout during Beatis, pale morning dun, and other mayfly hatches . . . when a beadhead version would have received the cold-shoulder.

Super-realistic stonefly nymph patterns, complete with creepy-crawly legs, gills, forked tails, antenna, and segmented thoraxes, look really nice in a fly bin. But I’ll take my chances on patterns that subtly represent a stonefly and the best of the lot is Pat’s Rubberlegs. Pat’s Rubberlegs, which is also called “The Pickle” and is closely related to the original Girdle Bug, has become the absolute go-to pattern for western guides when fishing 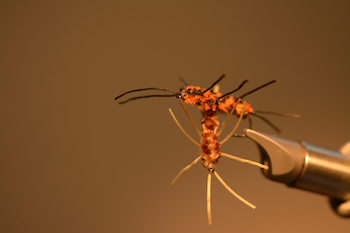 Call it the Turd. Call it a Girdle Bug. Or just call it Pat’s Stone. Whatever you call it, expect it to fish.

two-fly setups under an indicator, or when dropping a stonefly nymph off an adult stonefly imitation. This pattern’s Superfloss legs wiggle in the current and its simple chenille body, tied in any number of colors, offers a nice “stoneflyish” silhouette. Seriously, most stoneflies hatch on freestones streams where the current is ripping along and trout don’t have time to count segments or legs. So, why bother with realistic patterns? If you lose a Pat’s rubberlegs you don’t have to shed tears or wonder why you invested two hours in tying a realistic pattern when the odds of losing it to the bottom were so significant. Pat’s Rubberlegs is easy to tie and tricks opportunistic trout. What else do you need?

You won’t find Greg’s Incredible Egg in a fly bin—it’s so ugly nobody would pay money for it.  And maybe it’s a little pretentious to say it’s one of the best nymphs of all time. But remember, it’s an egg. Do you think that trout and whitefish only eat perfectly round versions of trout, salmon and sucker spawn? The “GIE” is only representative of an egg and that is the beauty—you don’t have to tie some perfect version to get results. Once I 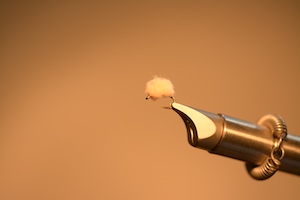 Top nymph of all time. It’s not even a nymph! But the GIE is quick to tie and catches hella numbers of fish.

have materials in place, I can whip out a GIE in 40-some seconds. And why is that important? Because eggs don’t float on the surface. They roll along the bottom rocks. And that’s exactly where you need to fish an egg pattern. That means you’ll lose plenty of flies to the bottom. When you lose a GIE you know it won’t take long to replace it. Note: The GIE is especially effective during late fall and winter, extending into the spring season and works well on Rocky Mountain freestone streams.

A college girlfriend of mine always got her words mixed up and called this pattern the “Bear Creek Bitch” which I actually prefer over the fly’s real name. But that’s neither here nor there. What’s important is this: the Bitch Creek Nymph is a killer pattern during western salmonfly emergences when it can be fished in and around boulders or swung towards shore with equal success. There’s no official count on which stonefly patterns have 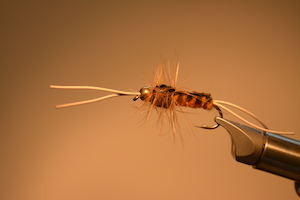 Bitch Creek Nymph or the Bear Creek Bitch. You choose.

accounted for the most 20-plus inch browns and rainbows over the years, but my unofficial guess is that the Bitch Creek Nymph holds that spot. But don’t get the idea that this fly is only productive during the early summer salmon fly hatch. I’ve cut the white rubber legs off this pattern and deep drifted it during later summer, in crystal clear water, for picky British Columbia bull trout that ranged to 14 pounds. And I’ve sight-fished it to steelhead on Vancouver Island in British Columbia. Took two in a matter of 20 minutes. The Bitch Creek Nymph is worth a try wherever you go.

This is a newish fly on the block, but one I fished extensively last winter while matching midges on Montana tailwaters and elsewhere. The silver bead at the hook eye imitates a 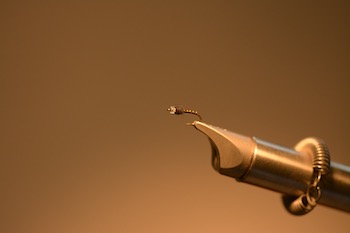 Baetis and midge-scarfing trout beware. You don’t stand a chance against the Black Beauty.

natural gas bubble that forms on midge pupa as they struggle to the surface. Fish key on that visual. Bonus: Doresey’s Mercury Black Beauty is easy to tie so you can bang out a dozen in an hour and be ready for a full day on the water tricking technical tailwater trout.

The Lightning Bug is a trout-getter in high and murky water conditions. However, it can be productive through the entire season, even in clear water. Tied with a pearl tinsel body, a silver bead head, and a silver wire rib, this thing—literally—shines. The Lighting Bug is a 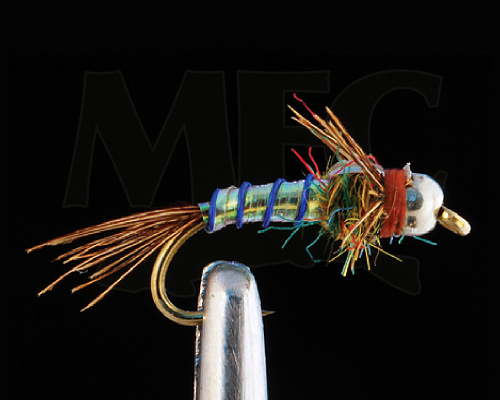 If you want whitefish, you’ll get them on this. It an be good on trout, too.

good match for a variety of mayflies and can be tied in any number of sizes and colors, with pearl, red and purple being standouts. This bug is most often fished in tandem with other nymphs and should be a staple when hitting any water where mayflies are present. A word of warning however—whitefish love this shiny fly and you’ll catch your share when fishing it.

I spent significant time with Gary LaFontaine before his untimely death due to complications from ALS. Shortly before he died he told me not to feel sorry for him because he accomplished more in his life, and had experienced so many great things, that he felt he’d already lived two lives. I still mourn his death, but he was right: He did accomplish great things and one of those milestones was leaving the fly-fishing community 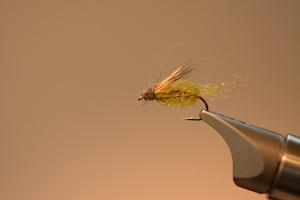 LaFontaine’s classic Emergent Sparkle Pupae. Fish this pattern when dries are flying about and people will ask, “How are you catching those fish?”

with the Emergent Sparkle Pupa. This pattern is lights-out when fishing caddis hatches, when most people cast standard dry flies, such as an Elk-Hair Caddis, to trout that they believe to be taking adults. And why wouldn’t they eat those adults: during spring caddis hatches millions of adults are flying above the water or just dabbing their butts on the surface to lay eggs. Trout will eat those bugs, but they prefer the ease of taking pupa drifting vulnerably just under the surface or in the surface film. With a deer-hair wing that can be greased with floatant, and an antron body that rides just under the surface and mimics air bubbles that the natural insect traps on its body, few fish can say no to Emergent Sparkle Pupa. So let all those dudes throw their Elk-Hairs at those rise rings and wonder why they aren’t catching. When they see your success and say, “What are you using?” just tell them the truth: “A caddis.”

I think you’re sensing a recurring theme: I don’t like tying time consuming flies, and I fish the bottom. That’s why I like the Zebra Midge. Again, you can whip out a dozen of these in an hour and they absolutely crush trout even on heavily fished tailwaters where I sometimes imagine trout cruising around with 2.5 power readers on their noses and 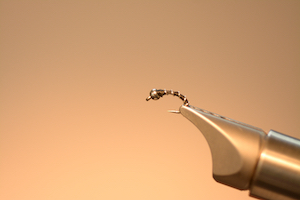 Hello Bighorn River . . . or any other tailwater for that matter. Match those midges with the Zebra.

notebooks tucked under a fin. But this thing gets them. And you can tie it in an array of colors to suit site-specific needs. Tie some with a bead, tie others without. See what works best. I prefer Zebra Midges beadless, with a simple wind or two of peacock herl at the head, above a black thread body and wraps of silver wire. If I need it on the bottom—where else would I place it—I’ll pinch a couple split shot to the leader, about 12 inches above the fly.

Nobody likes these things. Most of us wonder if they are even a fly. But the truth is, they can’t be denied. Freestone, tailwater, boulder pocket, broad flat—no matter where you throw the annelid, it’s going to take some trout. If memory serves correct, worms gained popularity on New Mexico’s San Juan River where typically picky trout couldn’t resist 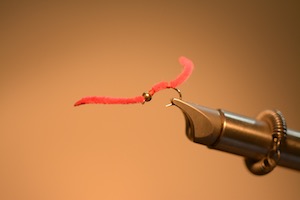 Gross. It’s a worm. And worms flush out of the banks and the bottom of a stream in high water. And trout eat them like crazy. So get over it.

them. Word spread and today the San Juan Worm is ubiquitous on trout waters. It’s most often used in tandem with other flies. Throw this thing as the lead fly with a small Baetis, midge or mayfly nymph trailing behind, or try it as a dropper off a high-floating foam stonefly or terrestrial pattern, and you’re sure to get eats. Today, there are numerous variations of this pattern, almost too many to choose from. My go-to is a standard thin, pink or red chenille version with a small bead in the middle. This one may offer a soft feel when a trout bites into it, versus a hard-wire, deep-sinking pattern that could break a trout’s tooth on impact. Ugly or not, you’d be crazy not to carry a few San Juan Worms to the water every time you try for trout.

If you wonder why a beat up stonefly dry works nearly as well or maybe even better under the surface than it did when floating high and dry, look no further than the soft hackle. Soft-hackles engage minimal amounts of material and end up representing nothing in particular but almost everything suggestively, and they send a message to hungry trout—I’m vulnerable and easy to catch. This may be why such a shabby looking fly can crush 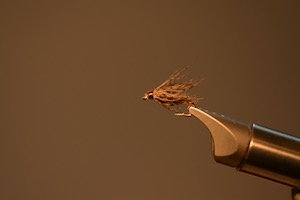 With the rise of trout spey, the soft-hackle is an absolute go-to fly.

trout during a variety of hatches in a number of ways—dead drifted under an indicator; floating in the surface film behind a dry fly; and especially, when swung on a tight line through riffles during a caddis hatch. Soft-hackles are tied in a variety of colors and body shapes, but the simplistic thread or pheasant-tail body versions, with a wire rib, and just two or three turns of Hungarian partridge hackle at the head, usually do the trick. Any time you have trouble matching a hatch, or you are waiting for a hatch to begin, the soft hackle should be a go-to fly. And, with a rise in trout Spey and swung flies on Rocky Mountain and Pacific Northwest waters, theres even more reason to tie these. —GT