Brooks Montgomery is one of the good guys in the fly-fishing industry and he happens to be one of the most respected fly-fishing representatives in the country. He gets paid to talk fishing, to go fishing, and to make sure that fly shops, especially in the northern Rockies, get the quality product they need, on time in the right supply. 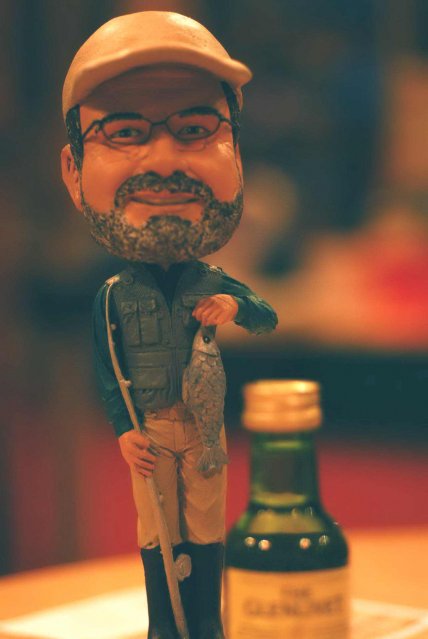 Among other things, Montgomery created and managed the U.S. Antarctic Field Safety Training Program and, while doing so, was presented with the “Citation of Heroism” by the Secretary of the Navy for successful rescue of injured pilots in Antarctica. In addition, Montgomery played in the Owl Club’s house band and if you’ve ever been to the Owl Club in Salmon, Idaho, you know what that was all about. Finally, Montgomery is a good fishermen, a true steelhead addict and a carp connoisseur. He represents these noted brands: William Joseph; Scientific Anglers; Clackacraft; Lamson; Rainy’s Flies; and more.

Recently, at an annual trade show in Denver, Colorado, Montgomery was presented with Scientific Anglers’ rep of the year award along with two more excellent reps, Scott Harkins and Greg Pearson. For that distinction, each was awarded a bobblehead—a replica of themselves! Now who else has that except Ichiro?

Following is Montgomery’s humorous account of his return from Denver to Salmon, through security at Denver International Airport. Montgomery had stashed his bobblehead in a carryon pack:

Security guy behind the x-ray conveyor: “Is that a bobblehead?”

Security: “With Glasses? I’ve never seen a bobblehead with glasses. Is that you?”

Me: “Yes sir. You can tell that’s a bobblehead with glasses with that x-ray machine?”

Security: “Yep. I’ve never met anyone that had their own bobblehead.”

Me: “Want an autograph?”

Security: “Move it along.”

Ok, so fly-fishing fame only goes so far. Nonetheless, congrats to Montgomery, Harkins and Pearson.

This entry was posted in Industry and tagged Brooks Montgomery, Scientific Anglers. Bookmark the permalink.