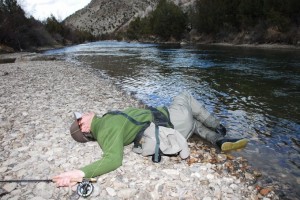 A breathe through your nose event

Southwest Montana’s big-name streams are best known for their massive salmonfly hatch, an event that brings large trout to the surface and anglers to the rivers in droves.

If you choose to fish the salmonfly hatch, which arrives in May and June on most southwest Montana rivers, expect to share the water with dozens of driftboats and hundreds of anglers casting from the banks. Drifting the river during the salmonfly hatch can make anglers feel like they’ve landed in a bumper car arena.

I’m not into crowded fishing conditions so I choose to spend many of my days fishing the Madison, Bighole, and the Yellowstone in March, April and May, before the visiting masses arrive. And that is a great time to be on the water if you can blow off work and hit the river between bouts of high water. The reason: the aforementioned streams kick out some large rainbow and brown trout at that time and they provide a caddis hatch of immense proportions. 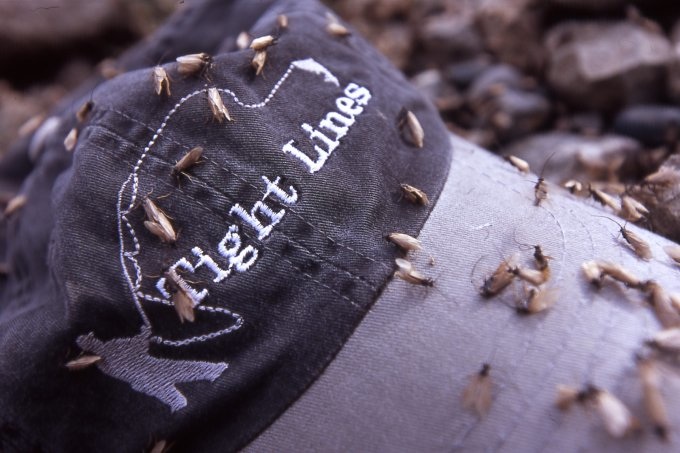 That caddis emergence, affectionately called the Mother’s Day caddis hatch, may be encountered anytime from early May through the end of the month, with the peak usually taking place from a week prior-to through a week after Mother’s Day, May 12.

When the hatch is on, anglers stick trout in the morning and early afternoon hours on a variety of caddis pupa patterns. Dry fly opportunity arrives later in the day when, literally, millions of size-14 Brachycentrus caddis take flight and hit the water at the same time.

The hatch is an absolute spectacle when it’s really on; anglers must breathe through their noses to avoid sucking in wayward insects; songbirds and swallows rip through the air, plucking caddis from the surface of the river or in flight; big brown and rainbow trout hold just under the surface, rising to the masses. Anglers are literally covered in caddis –- they climb up waders and onto arms and into ears and around the eyes. It’s not a scene for the squeamish.

A variety of caddis adult patterns work during the hatch, but a couple standbys are the elk-hair caddis, the X-caddis, and the LaFontaine emergent sparkle pupa.

According to Lyle Reynolds,  who used to run Sunrise Fly Shop in Melrose, the late April through late May time frame offers some of the best fishing of the year in southwest Montana.

In my opinion (the Mother’s Day caddis) is the best hatch this river has to offer,” Reynolds said of the Bighole. “It’s way more productive than the salmonfly hatch and there aren’t as many people on the water. I’ve seen the caddis hatch so thick, the water just looks white. During the hatch we catch 50 or 60 fish a day and we get some really good ones.”

Most sections of the Bighole fish well during May, but the canyon section offers the densest caddis hatch. The entire river is best fished from a drift boat or raft in May, especially as the water rises with snowmelt.

On the Madison, look for the Mother’s Day caddis below Ennis Lake through the Beartrap Canyon and on downstream to Black’s Ford. On the Yellowstone, those caddis are found in the Livingston area, making fishing at that time a leave-work-early proposition.

Of the three rivers where the hatch occurs most densely, the Madison is most reliable. Often the Yellowstone blows out during the hatch. The Bighole may offer the same frustration. But dams regulate the Madison and it typically runs in decent shape through the hatch. If you encounter poor conditions on the Yellowstone or Bighole, travel an hour and half and you’ll likely find decent conditions on the lower Madison. If cool weather occurs in early May expect an outstanding hatch and excellent fishing opportunity on the Bighole and Yellowstone too. If the weather is hot…um, hope for the best.

Four and five-weight rods are ideal for casting caddis imitations on the Madison, Bighole and Yellowstone. Bring warm clothes because late April and early May represent early spring in southwest Montana. Snow, sleet, hail, thunder, lightening … or 80 degree days could be expected. Today, of course, is April 29 and we had 12 inches of snow in Ennis this morning. It all depends on the mood of Mother Nature.