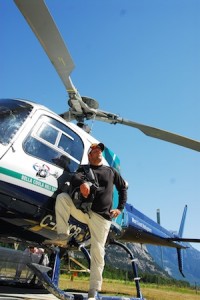 I don’t want to go all mystical on you guys, but I think karma has had a lot to do with my Dean River trip, so far. I didn’t ask for much, just a chance to fish the river and if a fish were to come to hand, so much the better. I just wanted to see the country and hope for the best.

So, there I was on the highway between Ennis and Bozeman, Montana last Thursday and I’m wondering why my battery light is on and why the charge is decreasing. Next thing I know I’m dead on the side of the road and my chances of making my scheduled flight to Seattle are going down the tubes. All of a sudden the whole Dean River trip is in slight jeopardy. So I abandon the rig and my wife picks me up a while later and we scream into the Bozeman passenger load area at 7 a.m. Somehow me and my bags get on the flight and we’re in the air, get this, at 7:20.

That night I got to share in a dinner at the Steelhead Diner in Seattle, courtesy of Deneki Outdoors and its owner, Andrew Bennett. The next afternoon we’re in Bella Coola, British  Columbia picking bottles and running a bill of $400-plus. Sustenance, baby.

Then, yesterday, at noon, we take off from Bella Coola in a sweet helicopter and we get the ride of our lives…and I mean that in a good way. I think we got VIP treatment from the pilot, a cool French-Canadian with a wicked sense of humor. At one point in the flight, shortly after piling over a 4,000-foot drop, and just as we’re getting ready to carve between sheer rock walls in the Dean River Canyon, the pilot, Richard, turned to us, rubbed his nose and said, “Uh, I got something in my eye.” 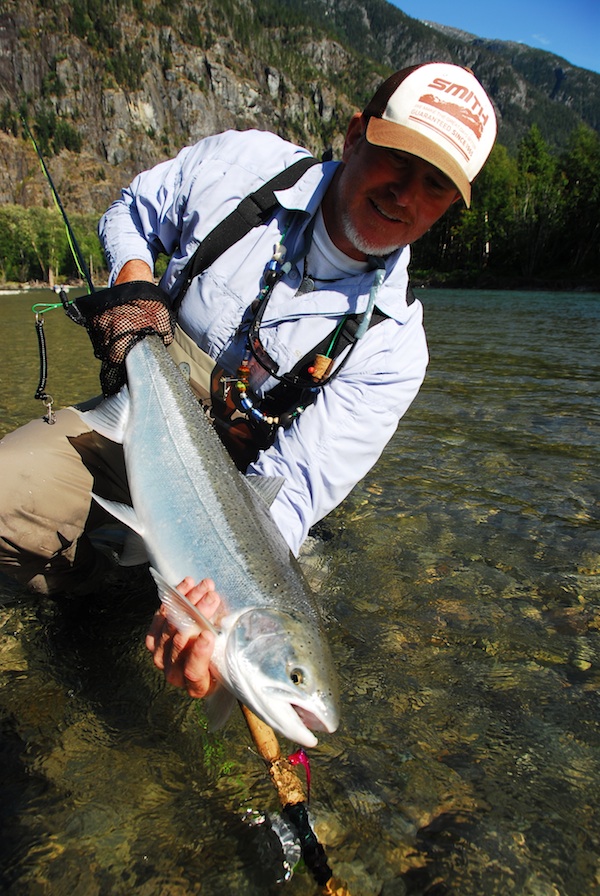 Two hours later, after a brief orientation and a short downstream run in a skiff, I’m swinging Wombat, a fly that George Cook gave me, through a run called upper tidewater. So I’ve been fishing the Dean for all of 15 or 20 minutes and the line comes tight. In an instant, a fish is charging downstream like it just robbed a convenience store and has its Air Jordan’s in high -gear. My guide, Pauly, says, enjoy it. But I can’t enjoy it because I have, what, a hundred yards of backing peeled from the reel and the fish seems bent on a return the Dean River Channel. It finally holds, then works back upstream and soon I’m holding the chromiest eight-pounder I’ve ever seen. A little while later it’s a 17-inch sea-run cutthroat, followed by a six pound hen. A little while later I’ve tied into something substantial and when I get it to the beach it’s a 14-pounder. Say, an hour later, just as I’m at the tailout of the run and thinking, this is over, my line comes tight again. This time I’m thinking I’ve got a king because the fish is fighting slightly more disciplined than the others. But, alas, another steelhead, a sweet, bright specimen that Pauley calls 16-pounds. Let me tell you, I’m a lucky dude.

This morning, we climbed on quads and Great-Raced it to the upper sections of the lower river. Spent a couple hours in one run that seemed a little fast and never got an eat. Switched gears and hiked to another generous section and pretty soon Bennett is hunched to the side and his spey rod is doing the sweet tip-dance. After crossing a sidechannel I reach him and he’s got a 10 or 12-pound hen, chrome-bright again, finning in the shallows. A half hour or so later, in the same run, I’ve got a six-pounder to the hand.

So I asked for a single fish on this trip and now I have five. And I’m headed back out on the quads as soon as Andrew is ready. I am so fired up right now you guys don’t even know. I told Andrew I’m going to get stretch marks from the perma-smile I’m wearing. It’s 70 degrees outside, these absolutely high-rise, snow-capped mountains are towering overhead and a breeze is cutting through the cedars. The horseflies are sent by the devil, but I’ll take them, too.

Back with more tomorrow or the next.

This entry was posted in British Columbia, CANADA, Northwest, Spey, Steelhead, US & Canada and tagged D. Bookmark the permalink.