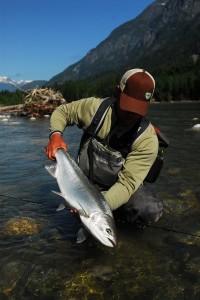 A windfall of metal… and Whitey does the big two-four

So I’m stading in a run called Totem and we’ve just hammered some fish out of it, to the tune of four hookups in one pass. And I’m thinking, in two more days I’ll be back in Totem. The fish will be there. The water is silky smooth. Slick actually. And that’s when it dawned on me to throw a dry fly the next time I fished it. Two days later and there I am, saying, Well I could throw a dry but my best odds are to stick that pink leech back on and rip away for numbers. And I’m a fish junkie. Never too many. More, more, more. That’s when my partner, Gary, says, “You’ve had this dream, Greg. You said you were going to fish a dry and now you can. Give it 20 minutes or so and then go to the sink-tip if you’re not happy.” 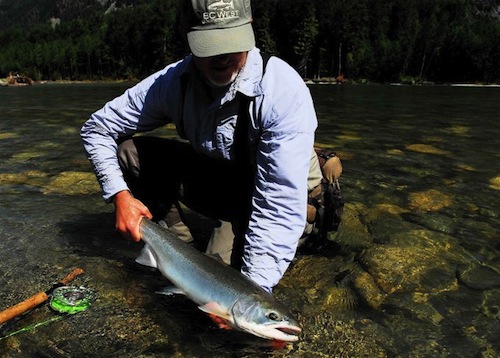 I I picked a dry fly that looked like it should work and tied on. MO Heavy Rio Tip on a 14-foot 8-weight Winston Boron II. I’ve never thrown a dry for steelhead and had no idea, really, what I was supposed to do. But they call them skaters, right? I threw across and down, watched the white post carrene over the waves, then send out its little V-wake of love. When I started fishing it I thought, No way. But now I started believing. The thing looked killer. And what happens next? This monster back comes out of the water, my fly is just about to sink in to a bottomless mouth, and I go all Timmy Trouty, meaning I yanked that dry right out of that steelhead’s mouth. As the fly settles another boil at the fly, but this time the fish wasn’t sure. I freaked him out and now he’s down. I gathered composure, looked up in the sky and laughed, then threw a bunch of casts in the same spot. But no go this time.

A little while later, at the bottom of the run, where I hooked some fish two days prior, the dry fly is skating at a snail’s pace and all of a sudden I see a tremendous boil on the fly. I didn’t twitch, didn’t lift. Didn’t do anything. Unforunately, the fish didn’t come back and I’m 0-fer on my dry fly steelhead. But what a blast. What a rush! Basically, I saw a 14-pound rainbow rise to a dry fly. And then I saw that second boil. When I told the fellows about my experience they said, “Did you tie on a Skunk and throw that right after you rose them?” No. They said I missed a sure bet, that I could have had those two fish for sure. But part of my thought process was this: Gary gave me the water first. I said I would cast a dry fly and did. If I’d switched over, even though I would have been throwing off a dry line, I would have poached his water. Dry fly or nothing baby. 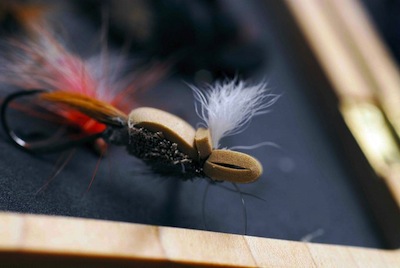 Rose a couple to the Gurgler.

So, anyway, that was the major event yesterday, except for Whitey continuing to rip it up, passing me in numbers landed. He’s on fire. He’s a really, really good caster and a fish head. As we rode back to lunch today I said, “What’s the count, Whitey?” And he held up a two one hand and a four on the other. Twenty-four. His new best for a trip on the Dean.

We’ve got this evening and that’s it. I’m going out right now to see if I can’t throw down the two-0 signal on the way home, ala Whitey’s gangsta two-4. It’s going to take three willing fish and a lot of skill to land them. But they’re pushing in on the tide right now and I have a few more hours in heaven.

Enjoy the pics, a compliation from the last few days.