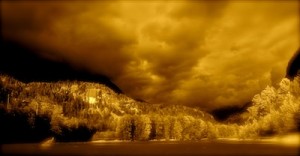 A few years ago I went to Russia for Atlantic salmon and watched a partner rip up the river while I barely landed a fish to every two or three of his. Then I went to Juneau, Alaska for steelhead and arrived way too early in the season, a single fish being my reward for a week of debauchery in the Alaskan Hotel and endless wading in cold streams with rain falling incessantly on my head. That particular and peculiar steelhead was skinny as an eel and probably died from the traumatic experience. 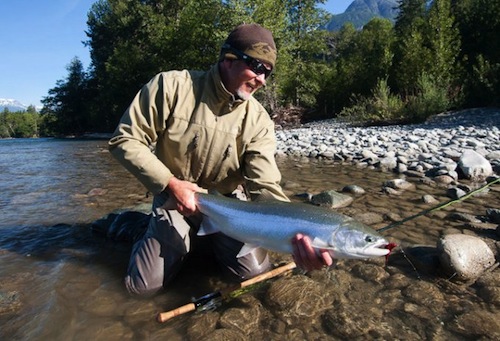 Then, last year I took my father to Alaska and participated in a conventional king salmon derby and in four days I caught nothing. Not even a silver, a pink, a chum or a halibut. After the derby the outboard motor broke down so I wasn’t able to access the steelhead streams I so desperately wanted to fish. The only thing that saved my ass was a sympathetic angler who gave me a ride to a local stream where I stomped about 20 sea-run cutthroat and an equal number of big dollies on a single tide.

And all this spring and early summer the fishing has been unremarkable for me, except for one bout on the upper Madison in May and another knockout afternoon exercising the Beaverhead’s big rainbows. What I’m getting at is this: for several years I haven’t experienced many killer days on the water and my trips, while entertaining, haven’t provided the catching that I appreciate. That is part of what makes my recent Dean River steelhead foray so remarkable; being in the right place at the right time finally happened and I wouldn’t have preferred that to occur anywhere other than on British Columbia’s Dean. 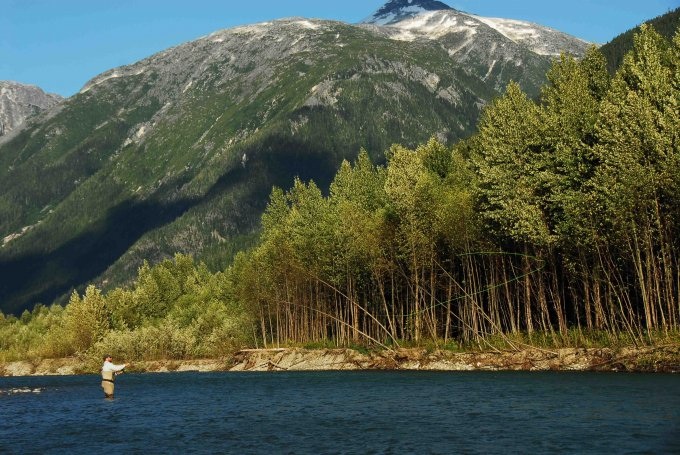 I’m taking a risk here that might make me appear as a pure numbers guy and way too high on myself as an angler, but I think it’s important to note the numbers and my fortunes as a perspective on the Dean River fishery and how unique our camp’s experience was this year. And it could provide a window on how the Dean might fish later this season and next year.

Check this out: Michael White, a rep for Simms and several other great fly-fishing brands, hooked 34 steelhead in six days last week and landed 24 of those; on my first trip to the Dean last week I hooked 28 chromers and landed 18; and no angler in our party of six landed fewer than seven steelhead; as a group we hooked 121 steelhead and landed 78 of those, all chrome-bright, perfect fish that seemed to eat the fly while travelling at speed; 18 straight times last week I saw my backing after hooking fish! 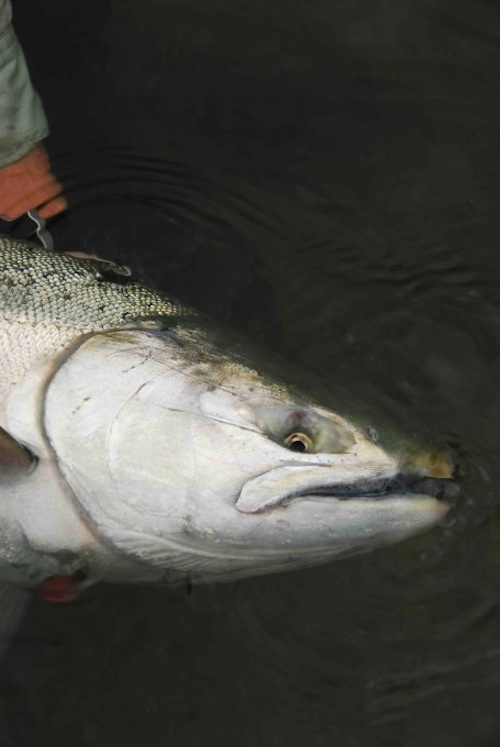 Our success marks a serious rebound for the Dean, which recently suffered through a couple tough seasons when groups of anglers caught as few as six fish, combined, during their weeklong visits, and individual anglers stood in particular runs for several days in a row without ever hooking a fish.

Anglers who visited BC West Lodge the week prior to my visit last week also shared in great success and the group arriving as we exited last Saturday was sure to encounter some great fishing. Old-timers are saying that the current run resembles runs from the 1990s and early 2000s when the fishing was off the charts. I’m already practicing my lines for Andrew Bennett, who owns BC West, some sorrowful diatribe on why he needs me to be on the Dean, again, next year, same time, same place. And I better get moving if I want to secure a spot because the great fishing this year means, likely, all spots will be booked next year. My suggestion: if any of you want to fish the Dean later this year, next year, and in future years, you better whip out the checkbook and get a deposit in the mail. July 17-24 2011! Ahh, the dream.

At the end of my stay at BC West I received a questionnaire asking what I enjoyed most about my trip and what the lodge could improve on in the hosting arena. Of course, I said steelhead were my favorite part because steelhead in the river means anglers are happy. When I thought of improvements to the operation, which I always can list after a lodge trip, I drew a blank. I think I just enjoyed the perfect trip. I wouldn’t change anything.

The camp was comfortable and safe. Our private cabins with running water were awesome. The clubhouse was a comfortable old-timey feeling lodge that Bennett won’t ever give up. “If I ever have to sell this place,” he said, “I’m airlifting that thing to my backyard in Seattle.”

We accessed the lower river via boat, with short runs to the great tidal influenced pools. And we accessed the upper river (meaning just above a set of gnarly falls that make the Dean River steelhead and king salmon so strong) via quads, which was a tremendously fun part of the overall experience. We went as far as three or four miles from the lodge and we came back each day at noon for lunch at 1. The food was off the charts, gourmand to the hilt and I’m paying for that decadence—today I had a fruit smoothie with soy milk for breakfast and I ate a can of albacore with mustard for lunch. Tonight I’ll have salad with no dressing. There will be no beer in my future for at least a week.

In the afternoons anglers slept or chatted, worked on gear or e-mailed. I downloaded images and cleared camera cards and charged batteries. Around four we’d go out again, very enthused, to see what was coming in on the flood tide. We’d return to camp around 8 each night when we’d find plates of heavy appetizers waiting in the clubhouse. We ate and enjoyed some gin-and-tonics and the complementary beer and wine. Others sucked down pomegranate martinis. Those who wanted could walk 15 minutes to the river and fish the Cutbank, a tremendously productive run that booted out fish each day. Every angler carried a radio in case any trouble happened, meaning a rolled ankle or a meeting with a wayward grizzly. And as much as I like to have a few drinks, and as often as I describe that to all of you, I appreciated this camp because the celebrations didn’t get out of hand; we all took the edge off after a long day with the numbing effects of a strong drink or two or three, but I didn’t wake up (at 5 each morning) with anything resembling a hangover and neither did the other anglers who are equally into their drinks. We fished hard, we took advantage of the opportunity to fish the Dean in what is, I hope, the start of another series of super-productive years. This was the experience of a lifetime and none of us wasted our opportunity on the antics we could engage in daily, if we chose, back at home.

So, my time finally came when I was in the right place at the right time. I am not a rocket-launcher in the casting department; I am still a little puzzled in the ways of steelhead; and late in my week on the Dean I was beginning to question my fly choice, my swing…my damn mojo. But there are fish in the river this year, lots of them, and when there are fish in a river it doesn’t take much to bring a few to the beach. If you can, purge the savings account, sell a couple rods and that extra shotgun you never shoot, or that 12-weight that’s too much of a meat stick, or your BP stock that isn’t worth shnizzle, and get to the Dean. BC West has a few openings in August for the timeframes of August 7-14 and August 14-21. These are prime steelhead weeks—the best of the season for those who want to catch big metalheads on dry flies—and those timeframes also offer the chance for some cohos. And, you should know, the river’s biggest buck steelhead, fish to 20 pounds-plus, are typically caught in August. If I could, I’d go right back up there and spend another week in pure angling bliss. It’s that good.