Dude what’s up with the boots on your feet?

The Beasties sang those words back in the late 1990s and if you had used that line to ask me what I was stomping around with on the Dean last week, I would have answered Korkers homeslice. And that was a good thing because I’ve suffered through the whole streamTread, Amphibian Rubber, Vibram sole debacle for the past two years, falling in the river more often than ever before.

So Korkers was gracious enough to send a pair of their Guide Wading Boot, which is made with their OmniTrax Interchangeable Sole System. I wanted to try that system to see if I could find better purchase on the stream bottom, and to see if I could use the boots and their different soles for various applications. And I knew I could give them a severe week-long test on the Dean River, which is a broad glacial flow located on British Columbia’s central coast. 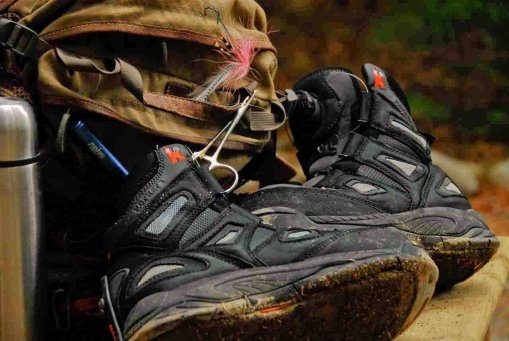 I wore the Korkers Guide Wading Boot for a week on the Dean River and discovered my answer to recent wading woes. I fished them hard and beat on them and nothing failed, not the OmniTrax soles or the unique Boa wire lacing system. Worn hard, put away wet.

The OmniTrax system offers multiple interchangable soles that pop into the bottom of the boot. A plain felt sole and a trail lug sole are included with each pair of boots. You can also add a studded felt sole, a Kling-On sticky rubber sole, a Studded Kling On sticky rubber sole and a Studded Rubber Mossy Rock lug sole. I found the studded felt sole to be money on the Dean where you wanted the grab of studs, but you didn’t need the hardcore lug soles. And the studded felt soles worked well in the boat, too, not being so oversized as to scratch things up or make me slip. The plain felt soles would have worked wonders, too, but I definitely felt more sound wading deep, in heavy current with those spikes. For streams like the Madison, the Gallatin, the Snake, the South Fork Boise and, say, the Yakima, these Korkers Guide Wading Boots with the felt sole with studs would be awesome

Although I was encouraged to keep the studded soles on in the boat (and did so), I liked having the option to quickly swap out the studded felt soles for the plain felt soles or the trail lug soles, which would do no damage to a boat. And that’s the way some guides and even some of my fishing friends want it these days—they treat their boats like Cadillacs instead of transportation tools. To each their own.

Another thing I like about these boots is the option to go with the trail lug sole when hiking into distant salmon, trout and steelhead waters. By wearing the wading boots while hiking you don’t have to pack an actual pair of hiking boots, which saves tremendously on weight.

I was a little leery of the Korkers unique Boa Lacing system, which uses a wire instead of laces, buckles or Velcro straps. I wondered, How hard can you crank these down? Will they stay fastened? Will it be difficult to get my foot into the boot?

Oh, I cranked them down plenty and they didn’t fail. And they stayed fastened, and super comfortable, with more adjustment than I’ve found with other boots. When wading in the Dean I tightened the wire to give myself stability. When riding the quads I quickly turned the adjustment dial and loosened them. I liked this lacing system for easy of access, too—when I loosened the adjustment dial the tongue pushed way forward and I found a massive hole to slip my feet and stocking foot waders into.

This entry was posted in Gear and tagged British Columbia, Dean River, Korkers. Bookmark the permalink.