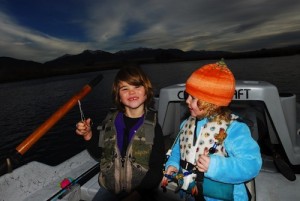 A sweet vest for kids and a first test on Ennis Lake.

I was on Ennis Lake this last week, taking advantage of the great weather before the snow arrived. Took the girls with me two straight days and we had a blast. A few weeks ago Backbone Media sent out fishpond’s Elk River Youth Vest and I was waiting for the right moment to give it to Tate.  After she’d landed a nice rainbow II said, “Seems to me that you’re missing something.” She said, “Hmm” and I replied, “Hey, hey, what’s this?” When I handed her the vest she said,”Wow, that’s for me.” She put it on and we adjusted the shoulder and waist straps so it fit appropriately. Then Tate started digging through the pockets saying things like, “Oh wow, I could put my Halloween candy in this pocket.” She found a large, interior pocket—one of 13 pockets overall—and said, “My new stocking hat goes here. And dad,” she continued. “I can put a jacket back here.”

fishpond says the vest isn’t recommended for children under 12, but Tate won’t go fishing with me now without having that vest on. Maybe it’s a little too early for considering Christmas gifts, but this would make any boy or girl proud. And, for $69, it won’t put you out of house and home to own. For more information hit up fishpond’s Web site at www.fishpondusa.com

This entry was posted in Gear and tagged Ennis Lake, fishpond, Madison Valley. Bookmark the permalink.