Columbia River Steelhead Run to be Average in 2011 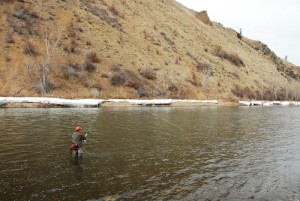 Note: Here’s a recent report as posted on Columbia Basin Bulletin. Recent years have provided record-breaking steelhead returns to the Columbia Basin tributaries, but 2011 isn’t expected to be as phenomenal as past years. In fact, it’s supposed to be

average at best. So get your licks in now and hope for the best come summer and fall. GT

Forecasts released early this week point toward an average upriver summer steelhead return to the Columbia River – an overall run that is expected to total 390,900 adult fish as counted at Bonneville Dam.

Dam counts now reflect data on whether a passing fish had a fin clipped or is unclipped, which means it was either naturally produced or was released unclipped from a hatchery. Fisheries officials estimate that a relatively small portion, perhaps as little as 10 percent, of the unclipped steelhead are of hatchery origin.

But the U.S. v Oregon Technical Advisory Committee forecasts, like the one released Monday, involve the incorporation of run reconstruction data that allows a more accurate hatchery/wild comparison. TAC’s federal, state and tribal members use biological data collected from research facilities at Lower Granite Dam on the lower Snake River and at Bonneville Dam, located near river mile 146 on the Columbia, to adjust for unmarked hatchery fish.

Upriver summer steelhead returns to Bonneville Dam have been relatively stable for at least the past 26 years (1984-2009). During 1984-2009 Bonneville Dam passage has ranged from 160,800 fish up to 630,200 fish with an average of 309,000 upriver summer steelhead, according to the Jan. 27’s 2011 Joint Staff Report prepared by the Oregon and Washington departments of fish and wildlife.

The 2010 Skamania return was the largest return observed since 1984. Skamania stock steelhead passage at Bonneville Dam totaled 29,300 fish including 10,400 wild fish. The wild component typically accounts for 20 percent of the return on average, but in 2010 the wild component was 35 percent, according to the joint staff report.

Wild steelhead passing Bonneville Dam during April-October in 2010 totaled 153,300 fish, compared to the preseason expectation of 89,900 fish. The wild fish component in 2010 represented 37 percent of the passage, which is greater than the recent ten-year average of 26 percent.

Skamania stock hatchery summer steelhead are widely planted in the lower Columbia tributaries, including the Willamette Basin. Skamania stock hatchery fish are also released annually in some tributaries upstream of Bonneville Dam, according to the report. Wild lower river summer steelhead are present in the Kalama, Lewis, Wind, and Washougal rivers in Washington, and in the Hood River in Oregon. The lower Columbia River steelhead “designated population segment” was listed as threatened under the Endangered Species Act on May 24, 1999.