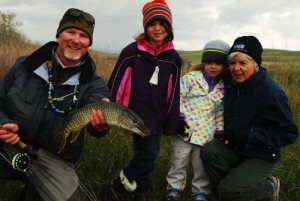 Headed out for Choteau, Montana for the holiday weekend and drove through about two inches of fresh snow on Norris Pass. Then the rain began as I reached Augusta. By the time I drove into Choteau, where it was socked in and rain was falling hard, I had my eyes open for a sporting goods store where I might be able to buy raingear for the girls, Myka, 3, and Tate, 6. I was realizing that it might be impossible to keep those girls dry.

Another thing that became impossible was reaching some private lakes that I’ve wanted to fish ever since last fall when I got my, er, lunch handed to me by scads of rainbow trout that range between three and 10 pounds. I managed one brown but it was as frustrating as fishing can be. So I was pretty disappointed when a friend said, “We can’t get in there to fish for those giants.” 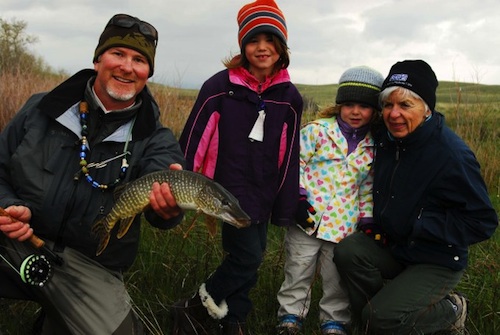 What to do? Instead of whining we drove out to Bynum Reservoir, which hosts some big trout, fish ranging, again, between three and 10 pounds. By the time we got there the sleet was falling hard. Standing water was everywhere and the wind was picking up. We decided to gear-up at the concrete outhouse, which has an overhand. When I jumped out of the rig with my gear and ran a few yards to the outhouse, I found three dudes already there, soaked to the bone. They looked like drowned rats and they kind of looked miserable.

I asked and they said, “We fished from shore with bunny leeches and didn’t touch a fish. So we launched our boat and trolled around the entire lake with diving Rapalas. And we didn’t get a single grab.” I don’t think I’ve ever heard a worse report. 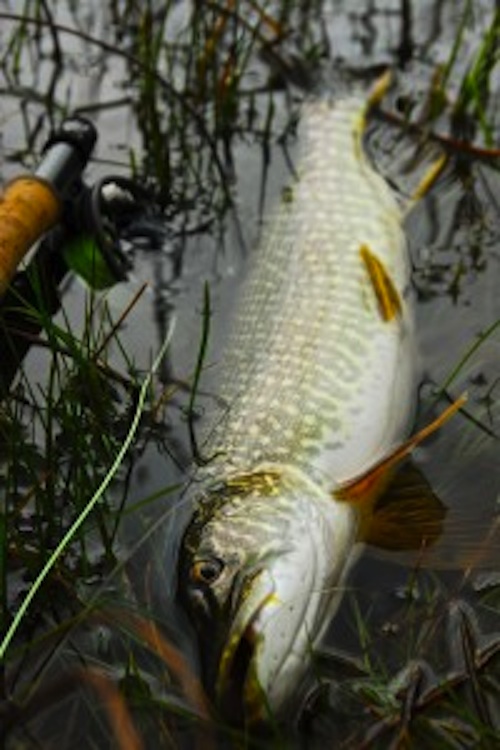 I looked at my frend, Byron Vadset, and said, “What do you think?” And Byron, who’s in his late-sixties, said, “We have to try it don’t we?”

Short version of the story, we didn’t touch a fish. Instead, we retreated to the Wildlife Sanctuary, a bar in Bynum, where we found those dudes from the lake, looking dryer and happier now, sucking down some cold ones. We joined suit, told them we drilled the fish, which spread shock across their faces, then told the truth and shared some laughs.

So what do you do when all your angling plans are wrecked? You get resourceful. That’s what Byron and I, and his wife Rickie and my girls, did the next day. We loaded up pontoon boats and our gear and drove to

Pishkin Reservoir to fish for, get this, northern pike. I have about two hours of experience with pike under my belt and Byron hasn’t caught anything closer to a pike than an eastern pickerel. But we geared up and I set out in a boat and within a half-hour or so something slammed my yellow segmented streamer and thrashed on the surface. A few minutes later I had a pretty nice northern sliding onto the bank with the girls and the Vadsets checking it out. An hour later I had another one on.

I could have fished that lake all day but the weather was slop and the wind was getting fierce. So we called it a day around 1 p.m. and I headed back to Ennis, with the heater cranked and the girls sacked out.

So, there’s some inspiration during this crazy late spring—if you get blown out one place, look around, take your chances, and just get out there and fish.

This entry was posted in Warmwater and tagged Byron Vadset, Pike, Pishkin Reservoir. Bookmark the permalink.