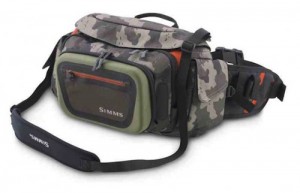 Sometime last year I wrote about an old Patagonia waist pack that served me well for seven years before giving up the ghost, meaning it was self destructing and needed a replacement.

I couldn’t find anything that looked like it would serve well my propensity to carry a ton of gear, including a 35mm camera with a lens or two. But then I phoned Simms and had them send out a Headwaters Waist Pack, which I have now used on multiple excursions, including an assault on big rainbows and browns in eastern Washington, and some serious streamer banging in southwest Montana. This is THE replacement for that Patagonia pack. Here’s why: the main compartment is easily big enough for me to fit a 35mm camera and a couple lenses; the middle compartment holds an inch-deep and 10-inch long fly box; the outside compartment holds all kinds of tools or a small fly box if you prefer; and the side pockets perfectly hold my flask on one side and the sunblock and insect repellent on the other and they are easily closed with Velcro flaps; finally, the top flap, which covers the large compartment be securely closed with a zipper or less securely but adequately for quick access by magnets.

I took the Headwaters Waist Pack on the Ruby River a couple weeks ago and was joined by a friend, Dan Summerfield. He’s an engineer and when he saw my new pack he gave it a thorough and critical examination. He’s an engineer. It’s what he does. A week later we were fishing again and he was wearing a new Simms Headwaters Waist Pack. “Couldn’t help it man. It’s a good pack,” he said. His only complaint—no D-rings on the ougside of the pack.

To me, the pack is perfect and if you’ve been searching for a quality-made pack that allows you to carry a lot of gear, a pack that fits tight around the waist and doesn’t slump, you better take a look at this one.

This entry was posted in Gear and tagged Simms. Bookmark the permalink.