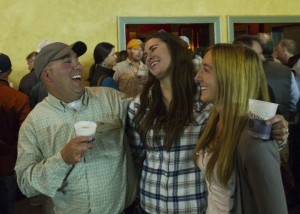 Our boy Michael Gracie showing the skills. Confluence Films and Yellowdog put on a great show.

Headed out last Friday for the Bozeman, Montana premier of Confluence Films’ new release, Connect. Connect is the third offering in a line of quality films and it follows Drift and Rise. Knowing the crew that would be in attendance, I figured I was in for a fun and somewhat wild time. And
the evening didn’t disappoint.

As expected, there was a pre-film party at the offices of Yellowdog Fly Fishing Adventures and a bunch of really cool people braved the rain and first chilly temperatures of fall to attend. Got to spend time with Stu Apte and his wife. Had a nice chat about life and kids with Craig Matthews, who owns Blue Ribbon Flies in West Yellowstone. I listened intently when John Stiehl,  narrater of Connect, as he described the recent run-in that he and Rich Paini had in Idaho—Paini was mauled by a grizzly bear and Steihl raced in with bear spray just as griz took off. Paini suffered a fractured arm, multiple lacerations and, I believe, he lost a finger. Pretty terrifying account, but Paini is recovering at home in Island Park and we wish him a speedy healing process. Got to talk with Ron Sorenson, who owns Chocolate Lab Expeditions and lives in my old stomping grounds of Ennis, Montana. Jeff Currier, fishing phenom numero-uno, was there telling tales of angling all over the world and teasing his segment in the film, where he lands a monster tigerfish. I had a nice talk with Jim Bartschi of Scott Fly Rods, who fished Japan for a super-entertaining segment in the movie. Scot Hed, director of the Sportsman’s Alliance for Alaska, walked up and introduced himself. We talked Bristol Bay and how to nuke plans for the Pebble Mine. Robert Eddins, owner of Ro Drift Boats was there with his wife Jane, which allowed an opportunity to blame him for the torn meniscus in my left knee (something that happened a couple weeks ago when Eddins told some guys to punch the throttle of their suped-up boat while I was, um, relieving myself off the transom). Eddins denies all involvement. Also got to hang with Michael Gracie who is helping with a redesign of Anglers Tonic and who, as I found in New Orleans in August and now again in Bozeman in October, is very generous with his drink donations. John Torak was in the house and we talked about his awesome Hatch reels, elk hunting, kids, etc. Overall, there were dozens of interesting people in attendance and it reinforced why fly fishing is great—the people you meet in fly fishing and the stories we share are super entertaining.

An event like the pre-party and the film showing offers the sense of being part of a larger community and that’s a good feeling. I don’t think you would get that sensation when hanging out around bankers or doctors or even teachers…or, say, a bunch of model train enthusiasts. By fly fishing, we as a group put ourselves out there and invite the unknown—experiences in the wild, as far as I’m concerned, can’t be topped.

The new film was shown in the old Ellen Theater in downtown Bozeman, a classic venue. Connectoffers segments from Yellowstone National Park; Japan; the Yukon River, Alaska; Tanzania, Africa; Cuba; and Maine. In the Cuba section you can’t help but be jeaolous of angler Greg Vincent who just throws the smack down on a bunch of nice tarpon. And it’s tough not to desire the adventure that Jeff Currier finds in Africa while searching for tigerfish. He’s more than happy with a few solid tigers but then he hooks the fish he never saw coming and lands a beast. There’s cutthroat fishing in YNP, and some solid striped bass footage from Maine, and there’s enthusiasm galore in the segment on big northern pike on the Yukon. But the segment that resonates with me is on Japan, where Bartschi meets a friend, Masa Katsumata, and the two head out on a small, crystal clear mountain stream to test their patience on Yamame trout. These fish are pan size, perhaps nine to 12-inches long, and beautiful, but super wary and difficult. This is where the film’s authenticity shows—Masa gives Bartschi a bunch of grief about his red trucker hat that the Japanese find outlandish. For any of us who have spent much time on the water this is a scene where we could trade out characters and place ourselves and friends in Masa and Bartschi’s boots. It’s the good-natured

banter that goes back and forth between anglers and is as much an ingrained part of angling as landing an actual fish. When Masa spoke about Bartschi’s hat the Ellen came alive with laughter and I think you’ll likely chuckle when you watch this segment, too. If you want to see a piece of that banter, check out the trailer at http://www.confluencefilms.tv/index.php

You can buy Connect online or you can catch a public showing this month. The film is showing in October in Portland, Salt Lake City, Bend, Denver, Ketchum, Jackson, and Brunswick, ME. On November 5 it shows in Whitefish.

Thanks to Confluence Films for the invite. Thanks to Yellowdog for the great food and drink at the pre-party. And thanks to Gracie and Eddins for that hangover Saturday morning. A final shout to Klug and his wife Hillary for buying me a chicken fried chicken steak for breakfast on Saturday. Probably saved my life. 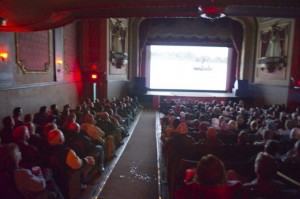 No, I didn't spill the ice. 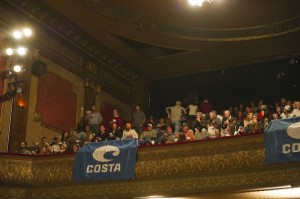