Alright, it’s not groundbreaking news that there is a DVD available called, simply, Tarpon. It’s a super-valuable compilation of documentary video that really lends credence to the early lives of such angling notables as Tom McGuane, Jim Harrison and Richard Brautigan. For anyone who fancies themselves a writer, and for those who hold an interest in tarpon, this is a must have.

In fact, it’s pretty interesting to hear these authors talk about tarpon with equal or even more respect than we hold for the fish today. There’s some knowledge to be gleaned from this video but it’s not a how-to catch tarpon film, that is for sure. It is a glimpse at old Key West and the early years of fly fishing for tarpon. The Key West tidbits are awesome, with narrative about partying and smuggling and the drugs and the feeling people used to have when living there—they were at the edge of the country and just beyond was a lawless zone that most of the residents dipped into on occasion.

This film is far from being shot in HD. Instead, it’s grainy, accompanied by a Jimmy Buffet soundtrack. Though shot long ago, there are scenes that remind us why we fish for tarpon and hold the fish in such regard. In one, an angler jumps a tarpon then throws a fit when the fish throws the hook. While doing so his sunglasses fly off his giant clump of hair and slam into the water. The angler doesn’t even realize this has happened and the viewer can only imagine how pissed off this dude is going to be after he realizes he lost a tarpon and his sunglasses in one motion. It’s clear that the deflation we anglers feel when a tarpon is lost was there in the 1960s and 1970s, too. 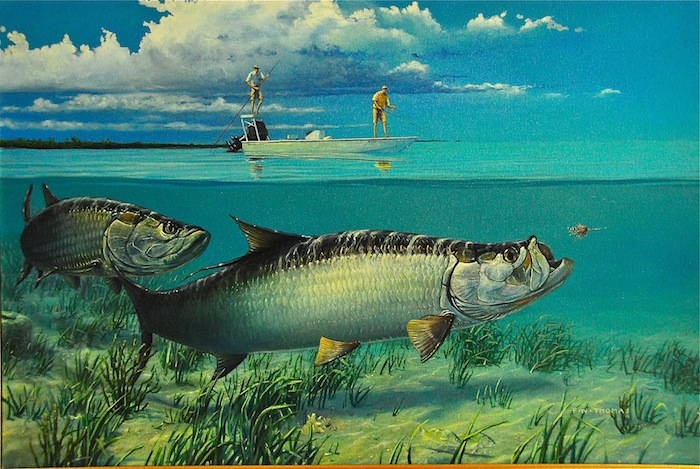 The tarpon of our dreams, by Fred Thomas.

I think Jim Harrison’s words, captured in the film, sum up what the film is about and why it’s so valuable to anyone’s fly-fishing library. He said,  “We go through life with a diminishing portfolio of enthusiasms. So you try to seek out in life moments that give you this immense jolt of electricity. It’s a tranquilizer better than any chemical tranquililzer. So you try to have something that gives you this electricity and freshens up your feeling about being alive.”

Own this video and see what Key West was like in the early days.

This entry was posted in Industry, Saltwater, Travel, Videos. Bookmark the permalink.