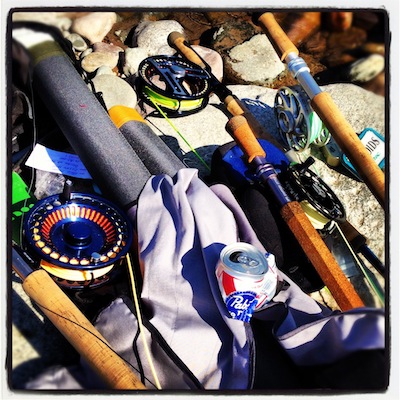 Thought all of you might like to see this. I took the girls to the Clark Fork River yesterday to let them dig around for crayfish and minnows and to get my gear set up for the Deschutes River steelhead trip I’m taking this weekend.

The girls chased minnows for a while and collected driftwood, but after a while, to my surprise, they wanted to cast. I thought it would be a disaster but was amazed at how quickly they picked up the general stroke. I’m not saying this is model casting, but they are throwing far enough in some instances to have a reasonable chance to hook a steelhead, and I know they can throw more line than they did yesterday.

What amazed me most is that they didn’t want to quit. They wanted to keep casting. By the time we walked away from the river they each had staked claim to one of my spey rods and were calling them their own. Tate went for the Sage Deathstar with a 500 grain head and a heavy sinktip. Myka chose the Loop Opti with an Airflo Scandi head and a 60 grain sink tip. Lots of fun. Hope you enjoy the video, albeit a basic video at best.

This entry was posted in Culture, Gear, Industry, Spey and tagged kids, Learning to spey cast. Bookmark the permalink.

3 Responses to Kids and Spey Casting: The first lesson.