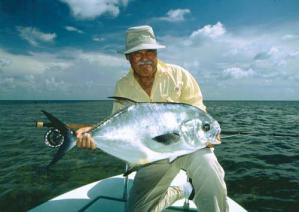 Chico Fernandez is one of the world’s authorities on saltwater fishing and he is also one of the world’s nicest persons, as any of you who have met him can attest. He loves all saltwater fishes, but holds a special affinity for permit, which are considered to be one of fly-fishing’s greatest challenges. I can attest: to date I haven’t caught a permit, that stat after having hooked one the first day I ever fished in the Caribbean. Chico’s is a stud of the permit world and you can learn a lot about that fish  and how to catch them in an article Fernandez penned for Fly Rod & Reel. Check it out and get ready to learn.

It’s often said that the weather never gets too hot for permit on the flats. Even in
the high heat of summer, when most bonefishing is done early and late in the day, permit are seen tailing during the middle of the day, in weather that is too hot for many fly fishers—particularly if you come from up north and are not used to 90-plus temperatures and high humidity.

But it can easily be too cold for permit. So during winter and spring in South Florida and the Florida Keys, when air temperatures drop into the 50s and below, you may have to wait a while before permit fishing gets consistent enough for you to hop on a plane with a handful of permit crab flies and make the trip south. But you still may have a burning desire to make this your year for a permit excursion. Well, how soon you can fish for them depends on how harsh a winter we’ve had in South Florida.

You see, even during a cold winter, if we get a few days of hot weather the permit will come from the reefs, in hours it seems, and feed all over the flats. Fishing can be good, even spectacular.

But the problem is that you never know till the last minute when these situations will occur. Most of the permit fishing in December, January and February is a last-minute thing that mostly the locals can take advantage of…and we do. But for you to book a trip months in advance in such unpredictable weather conditions is a gamble I would not advise, if permit is your only fly-fishing target. Best to wait till it warms up some, and then take the chance. And to some degree permit fishing is always a chance, isn’t it?

The good news: short of during a few windows of warm weather in the winter, the permit have not been fished much, so you may want to be here when they come on the flats for good…when they haven’t been pressured. I would say this is probably by March, that in most years you can count on enough warm days to bring the water temperature above, say, 70 degrees or so. Mind you, I’ve seen times when March was impossible; but, year in and year out, I’d take a chance on March, particularly in the Miami area.

Prime Locations
For permit in South Florida, you have the Biscayne Bay area and adjacent keys close to Miami, and the Florida Keys, from the Upper Keys to Key West. This is an area more than 150 miles long and many miles wide. There is lots of room to hunt the shallows and many permit opportunities. Believe me, you want to come.

By the way, READ MORE

This entry was posted in Saltwater, Travel, Uncategorized and tagged Chico Fernandez, permit. Bookmark the permalink.