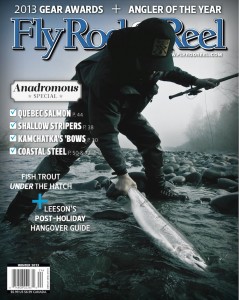 Back from an extended trip to Seattle with my daughters. Ran around constantly with them, sometimes taking the Washington State Ferry here or there, sometimes running alongside them as they practiced their balance on new Razors, lots of time spent walking with them or breaking up fights when they both went down the slide at the same time. I wanted to throw a line in the salt but never could break away. I’m back in Missoula now, cranking away on Fly Rod & Reel duties and the blog. You should see a steady stream of posts in 2013 as I’m planning to ramp up coverage of specific waters. Let me know what you’re interested in and I’ll do my best to cover it for all of you.

In the meantime, get over to the newsstand and look for the new issue of FRR. I think this one is pretty damn sweet. I tagged it as the anadromous issue and it includes pieces on Atlantic salmon, steelhead, striped bass, and the reopening of Kamchatka, via direct jet service from Anchorage, Alaska.

The issue also carries a holiday hangover guide written by the always witty Ted Leeson; a technical piece on fishing emergers under a hatch by trout guru Dave Hughes; the 2013 top gear Kudos awards; a piece by Chris Santella on our Angler of the Year, Craig Hayes of Turneffe Flats Lodge in Belize; a profile of artist Galen Mercer, who I am a big, big fan of (and that is saying something because I wield a super-critical eye for art; Seth Norman’s classic reviews of two new books; a piece on pike fishing in Europe; Gierach’s mad quest for steelhead in blown-out rivers; and a lot more.

I know a lot of people doubt fly fishing’s array of print magazines these days, but I sure think this issue is worth the buy. I was even able to get a killer monotone cover image approved and supported by our publisher and I think it will really catch your eye. Here’s a sneak peak of Louis Cahill’s unique and moody shot.

Hope you all had a safe holiday season with family. Now get out there and fish! 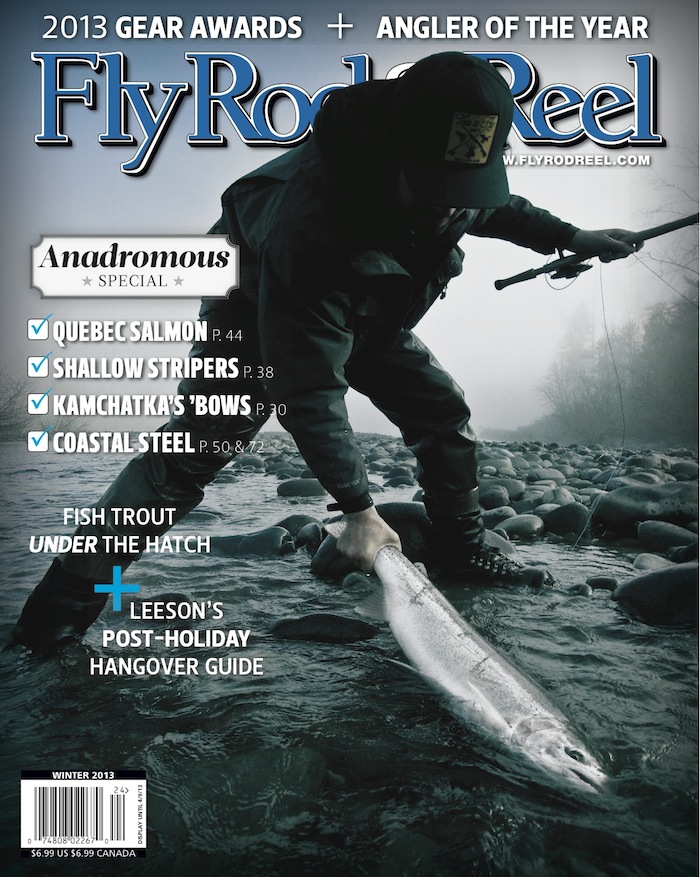 This entry was posted in Books, Culture, Travel and tagged Fly Rod & Reel. Bookmark the permalink.